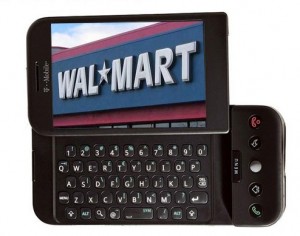 Got a grudge against your local T-Mobile spot keeping you from picking up your new G1? Come Wednesday, you’ll be able to get your Android fix at 550 Wal-Mart locations around the country.

Not surprisingly, the company known for pulling discounts out of thin air has managed to lop some change off of the G1. While getting the handset direct from Big Magenta would cost you $179.99, Wal-Mart is kickin’em out the door at $148.88 on a 2-year contract (or for those eligible for an upgrade) – that’s almost 18% cheaper.

It’s not yet clear who’s shaving pennies here: Is T-Mobile eating a few bucks to get contracts they otherwise never would? Or is Wal-Mart taking the brunt to get geeks into the store? We’re guessing it’s the first one. One of the biggest obstacles in front of the G1 (and the Android platform as a whole, really) will be making it popular outside of the geek crowd. Until your Grandma is telling you about how much she loves her new “robot phone”, Android isn’t a success. Getting handsets into the general retail space is a huge step in that direction.