Bleacher Report, a community publishing site for amateur sports writers, has raised $3.5 million in Series B funding from Hillsven Capital, Gordon Crawford, and SoftTech VC. Other participants in the round include Jacob Lodwick, founder of College Humor and Vimeo.

The extra cash should help the San Francisco-based company retain its 13 employees during a period of flattening online ad expenditures and layoffs in the startup community left and right. Bleacher Report is in a critical growth period having launched formally just this past February. Traffic has grown from 500,000 to over 2 million unique visitors in the last eight months, according to internal metrics. Co-founder David Finocchio says they’ve attracted about 7,500 writers to date, who collectively publish over 400 articles per day. 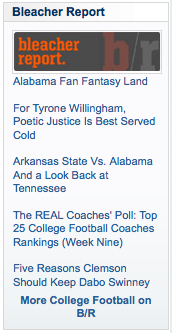 Bleacher Report has begun syndicating its amateur content to websites traditionally focused on professional writing, such as CBS Sports and Fox Sports. The screenshot to the left, for example, shows how CBS Sports compliments its own content with that from Bleacher Report. This is similar to the way TechCrunch gets syndicated to the technology section of The Washington Post.

Bleacher Report is also on Meebo’s list of launch partners for Community IM.

SB Nation, a blog network for sports writers, raised a “mid-seven-figure sum of venture capital” yesterday. However, their aggregation model is different from that of Bleacher Report, which is a publishing platform in and of itself.