Frogmetrics, a Y Combinator startup that helps companies quickly get customer feedback using a handheld hardware device, has launched to the public. The startup has created a custom firmware for the Nokia n810 internet tablet that lets companies offer their customers brief surveys that are far more convenient than traditional questionnaires, and has also developed advanced analytics software to help examine survey results. After months of pilot testing Frogmetrics has already landed its first Fortune 150 company – Google – and is now ready to start licensing its product under an enterprise subscription model.

Taking a Frogmetrics survey is incredibly simple – questions average around six words in length, and you simply tap the touch screen to answer each question. Most surveys can be completed in around 25 seconds, and while you can optionally choose to enter your email (if you’d like to be contacted by a manager after a bad experience, for example) there’s no obligation to do so. Contrast this with the archaic online surveys many retail chains employ that ask you to logon from your home computer and enter a 16 digit code for a chance to win a trivial prize, and it’s no surprise that Frogmetrics has seen response rates that put traditional questionnaires to shame. 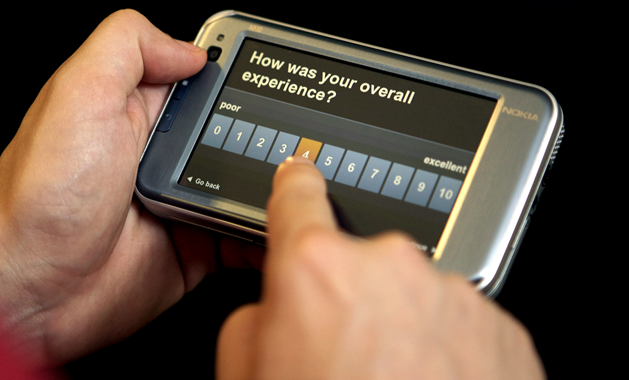 Frogmetrics initially revealed itself over the summer at Y Combinator’s Demo Day, but details were scant. Since then it has been running pilot programs in a variety of fields, including restaurants, retail stores, trade shows, doctors’ offices, resorts, and airforces, and CEO Scott Brown says that the response has been overwhelmingly positive. Customers are intrigued by these handheld devices (it’s almost like a game), and because they’re taking the survey immediately after their experience at a store or in restaurant, their opinions are much fresher in their minds.

It’s hard to get excited about a company that deals with surveys – we’ve all grown accustomed to simply ignoring them whenever possible because they usually seem like a waste of time. But Frogmetrics has built an impressively simple solution that only takes a few seconds and even verges on being sort of fun (at least the first few times). And with Google as its first major customer, it looks like Frogmetrics may be on its way to replacing those annoying receipt codes once and for all.