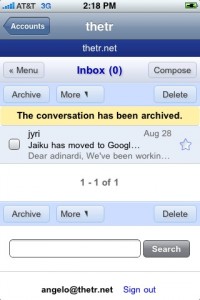 Good news, iPhone developers! If your application is vaguely similar in function to Apple’s own offerings, it might not ever see the light of day — even if it provides useful functionality that Apple’s application doesn’t.

Over the weekend, developer Angelo DiNardi told the tale of his would-be App Store application, MailWrangler, via his blog. By embedding Webkit and automatically handling login credentials, MailWrangler allowed users the full GMail interface (complete with the threaded views, archiving, contacts, and favoriting features that the Mail application lacks) across however many accounts they have without requiring them to log out and back in for each.

After more than a month of waiting, Apple finally gave word:

“Your application duplicates the functionality of the built-in iPhone application Mail without providing sufficient differentiation or added functionality, which will lead to user confusion,” they said. “There is also no way to edit an account once it has been added.”

Apparently, whoever gauged this application spent enough time to recognize a flaw (an annoyance, at most) within it, yet failed to recognize that it served an actual purpose. As someone who totes a handful of GMail accounts and requires much of the functionality that Mail’s UI can’t provide, I need this application. And what’s this nonsense about the application leading to “user confusion”? Anybody confused by the differences between this application and the one that comes on the phone probably shouldn’t be touching expensive gadgetry in the first place.

Anybody else feel a bit burned by Apple’s decision?