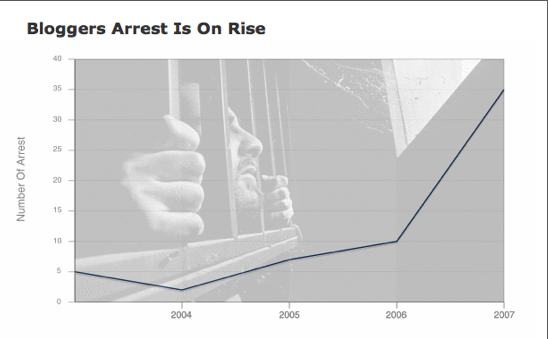 I found this arresting chart on Swivel. It plots the number of bloggers who have been incarcerated over the past few years, based on data collected by the World Information Access project. The number of incidents it tracks went from five arrests in 2003 to 35 last year. As blogging expands internationally, so do the risk of speaking one’s mind. (Something many of us take for granted).

Most of those arrests are in countries with oppressive regimes, such as Egypt, China, Saudi Arabia, and Iran. But bloggers have been arrested in Canada, France, Greece, and even the U.S. (with Josh Wolf being one of the most famous incidents—he spent the better part of a year in jail for refusing to turn over journalistic video footage to a grand jury).

A few involve cases of alleged terrorism or pedophilia, but the majority involve some form of political speech. Some typical examples:

Charles Leblanc (Canada; June, 2006): “For taking pictures at a conference for his blog.”

Hu Jia (China; December, 2007): “For posting his vocal critiques of human rights abuses and environmental degradation in China and calling the Olympics a ‘human rights disaster.’”

Nay Phone Latt (Burma; January, 2008): “For posting pictures of monks and people demonstrating on the streets.”

I’ve uploaded a spreadsheet with the names of all 64 arrested bloggers tracked by the WIA that includes their country, date of arrest, and reason for arrest. These do not include people arrested for impersonating someone else on Facebook or unfortunate enough to be beaten to death during an arrest.