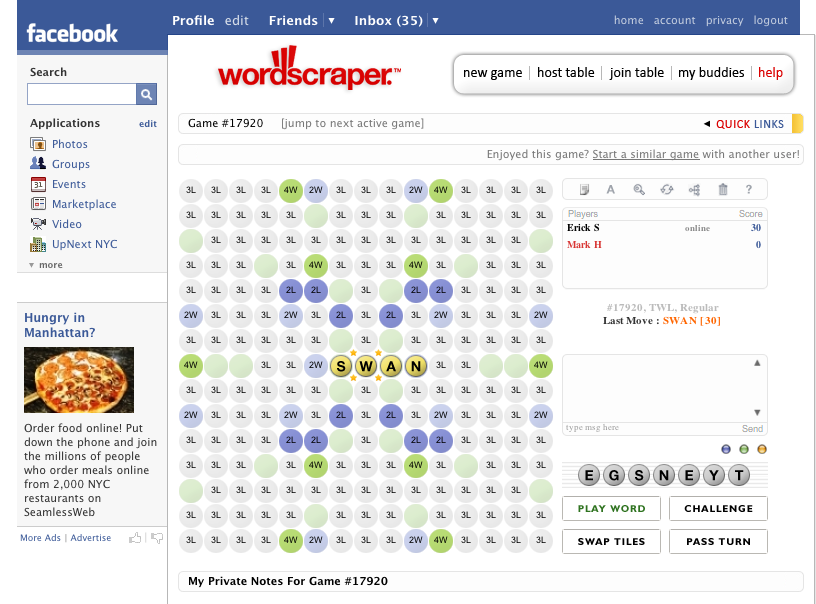 Yesterday, one day after taking down Scrabuluos in the U.S. and Canada in response to a lawsuit from Hasbro, the Indian brothers behind Scrabulous, Rajat and Jayant Agarwalla, released a brand new crossword-like game on Facebook called Wordscraper. The brothers have obviously been preparing this countermove for a long time. Wordscraper is designed to get around any of the intellectual property claims Hasbro has made against Scrabulous, especially the trademark infringement claims. The name is not a rip-off of Scrabble, the board looks very different, and there are even some new twists to the rules.

The brothers have even foregone the familiar square tiles for circles. Quite frankly, I don’t like this. It hurts my eyes. (Call me a traditionalist). It all blends together and makes it hard to grok the board at a single glance.

The gameplay is much better. Wordscraper is like Scrabble with wild board tiles. You can create your own board by putting assigning different point values to each space where a player puts her letters. For instance, instead of a set pattern, you can move double-word or triple-letter score tiles around the board before you start playing, and you can go crazy and stick in quintuple-word scores. (Go easy on those).

Wordscraper has a good chance of unseating the official Scrabble. (In a TechCrunch poll with 2878 respondents, 66 percent think that Hasbro went too far with its lawsuit and will suffer a resulting consumer backlash). Just please, do something about those circles. They make me dizzy.