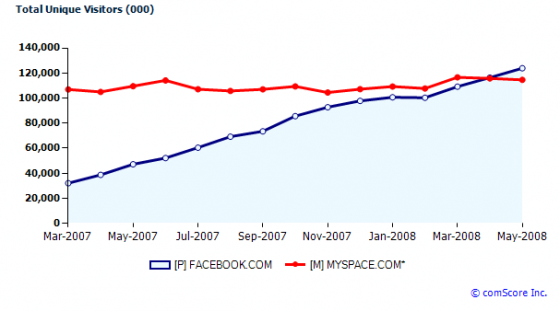 In April, Facebook caught up to MySpace in worldwide unique visitors (actually nudging past it with 116.4 million unique visitors versus 115.7 million for MySpace). Now the worldwide comScore numbers are out for May and Facebook continues to blow past MySpace with 123.9 million uniques (up 6 percent), versus 114.6 million for MySpace (down 1 percent). Facebook also boasted more pageviews worldwide (50.7 billion versus 45.4 billion). Maybe MySpace’s redesign which just went live this week will pick things up for them again.

In the U.S., though, which is the biggest advertising market, MySpace is still well ahead of Facebook, with 73.7 million unique visitors in May compared to 35.6 million for Facebook. And that number for MySpace is up 2 percent from April, whereas Facebook’s had 0 percent growth. So it remains to be seen if and how fast Facebook can catch up in the U.S.

As for the second-tier social networks, they have fewer than half as many visitors. Here is the breakdown for May: