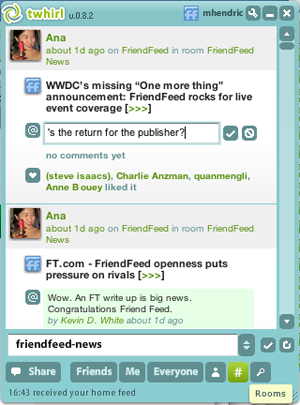 I’m in Erick’s camp. While delighted to receive the occasional YouTube video in my inbox from friends, I largely sit things out when it comes to personal broadcasting services like Twitter and FriendFeed – they simply generate too much noise (and I have too little time to sift through it all).

So perhaps I’m not the best-suited to review the newest version of Twhirl, one of several desktop applications that help you track public conversations and the media shared by your internet buddies.

Twhirl version 0.8.2, released just moments ago, improves the AIR client’s FriendFeed support by adding the ability to comment and “like” items inline, filter by rooms, view avatars, and access links in comments. Pics can also be dragged and dropped onto the client for quick sharing.

On the Twitter side of things (FriendFeed and Twitter are separated into their own windows, unlike with Alert Thingy and MySocial 24×7), Twhirl now allows users to auto-throttle their data requests. This comes in response to Twitter’s regulation of how many times per hour 3rd-party services can retrieve data for a particular user. If Twhirl users enable auto-throttling, the client will automatically generate only 80% of the allowable requests. This prevents users from getting denied updates when they go over the limit (perhaps by manually refreshing a tad too eagerly).

Loic Le Meur, CEO of Twhirl’s parent company Seesmic, says that the newest version also supports XMPP for when Twitter decides to turn that technology back on. XMPP would allow Twhirl to receive updates instantly (kind of like push email) instead of pulling that data periodically.

Le Meur also says that Seesmic integration is coming in the next version, as is consolidation of all three services – Twitter, FriendFeed, and Seesmic – into one panel for a unified user experience. Seesmic’s API, however, means that any of the other desktop clients can add Seesmic support as well. Let the arms race continue.

Disclosure: Michael Arrington is an investor in Seesmic.