Prediction markets are being touted as the new way to really engage users. If you can get users to mass around content like a fantasy league, the idea is they will consume more, super-charging traffic.

There are a few out there already: BluBet (more of a game than a market), The Industry Standard re-launched (with mixed results) aiming at tech, Pikum is majoring on sports, and HubDub is aiming at general US news (though it happens to be based in the UK). Today HubDub has launched a new feature which will be of particular interest to the tech community and one which should prove both fun and interesting at the same time (reports TechCrunch UK).

PunditWatch is tracking ten “pundits” across four categories: politics, technology, entertainment and sports. Whenever someone makes a prediction on the tracked site, Hubdub either places the prediction in an existing HubDub market or they create a market for it. Every pundit has a shadow HubDub account as if they were playing HubDub themselves. Then HubDub’s users see those markets and start trading them, and the value of the predictions goes up and down.

For example, on 12th of May we predicted that the 3G iPhone would launch in May, but the value of that prediction started to go down as May played out (sorry John Biggs!). 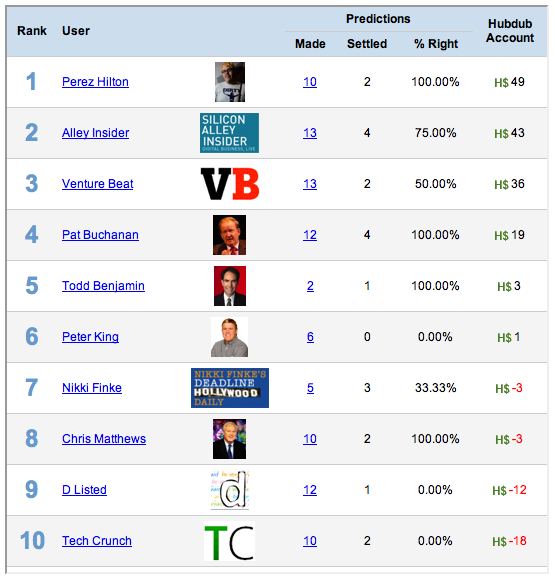 Ok, so just before I garotted Nigel Eccles, HubDub’s co-founder, for putting TechCrunch at the bottom of their leaderboard, I had to ask him why. The reason is that we made 10 predictions in the last month, of which two have been settled (as in, they did or did not occur). The settled predictions were “Will Microsoft make another offer for Yahoo by the end of May” and “Will Yahoo and Microsoft announce a Search deal by the end of May”. Both were a no. Ah well, you win some… Currently, a lot of the open predictions for the top tech blogs are around the 3G iPhone. So we’ll have to see who wins that one…

Of course the serious point to all this is that HubDub will use PunditWatch it to drive users to pile in and make predictions and back their favourite news sites. To my mind this is a lot more fun than the model which the re-launched Industry Standard has come up with, and the numbers speak for themselves. Most of the Standard’s hover around the 50% mark, which indicates that very few people are trading on them. The Standard has 72 questions open at the moment. HubDub has 1,512.