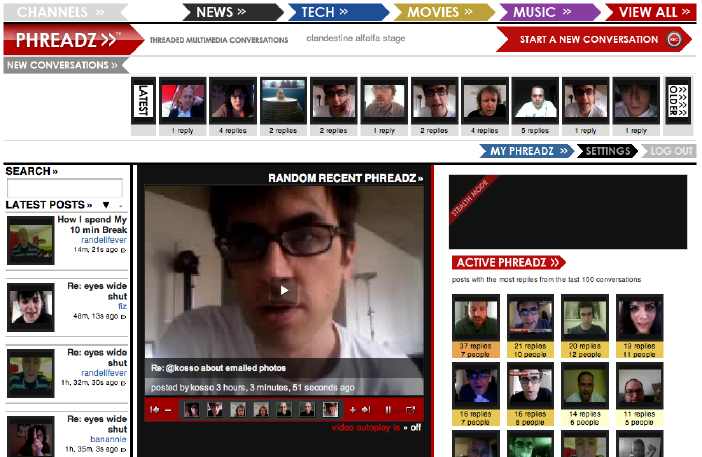 On first look, Phreadz does appear to be aping Seesmic. Threaded video conversations and an invite-only Alpha are just two of the similarities. But you won’t find any of Seesmic’s code in this new UK-based “social multimedia conversation network,” reports TechCrunch UK.

Firstly, it is going further than Seesmic by pushing the envelope on the concept by interweaving video, images, text, audio and links all into these video conversations. Secondly Phreadz was built in entirety by “Kosso”, a British developer/entrepreneur who – as many players in the UK scene know – has been gestating the concept for some time. Phreadz is also sending media outwards. It’s capable of cross-posting your content to Blogger, WordPress, TypePad, Livejournal, Flickr account, Blip.tv and links via Twitter. It will also automatically encode recorded Flash to MPEG4 (and other formats). And you can also send it photos, audio or video via email from you mobile phone (Nokia N95 or iPhone) or embed widgets of threaded conversations, as below.

Whether all of these extra features means Phreadz moves away from the pure video experience offered by Seesmic, and therefore loses focus, remains to be seen. For now its early closed Alpha status means many of its features have been tested by only a small audience. Meantime, it’s one of the more originally-backed startups – being bootstrapped with the proceeds from a blogging system Kosso built for Second Life users. As an ex-BBC Online guy, Kosso previously built a mobile blogging system for the BBC News site’s coverage of CeBit in 2004, later leaving the BBC to become CTO/sole-lead architect at Podcast.com which he recently left.

There’s a longer review of Phreadz on TechCrunch UK.