Twitter is an efficient technology for spreading and harvesting concise ideas. Unfortunately, it’s not so great for sharing rich media. Want to broadcast a video? You’ll have to settle for a TinyURL to YouTube, or maybe switch over to Seesmic altogether.

Pownce improves on the Twitter model by supporting file transfers and at least one new data type: the structured event. It also appears to be evolving into a better system for trading music, possibly with a full-featured music player.

But if music is indeed a significant part of Pownce’s future, then Blip is one step ahead. Call it “Twitter for Music” since it’s essentially just that: a way to suggest music and share your thoughts about it with a network of contacts. 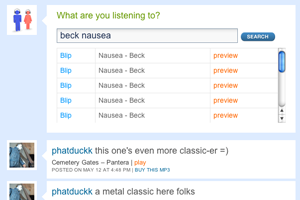 The beauty of Blip is that, unlike with Pownce, no file uploads are necessary. Just search for the song you have in mind and Blip will grab it from Seeqpod, Skreemr, or parent company Fuzz’s own database of music. Your followers (“listeners”) can hear full versions of the songs you post using a Songza-like player at the bottom of the page.

Of course, just as people are wary of joining yet another social network, they’re sure to think twice about leaving behind a network of followers for a new micro-blogging platform. So Blip debuts with the ability to push messages out to FriendFeed, Twitter, Pownce, and Tumblr. This may not ensure its survival in the long run, especially if Twitter or Pownce decide to integrate Songza, but it should help with adoption rates.

Fuzz, the company that created Blip, is a self-described “CRM for bands” – a place where indie artists can set up web presences and manage their relationships with fans. It also features a mixtape maker like Mixwit and Muxtape, but with songs contributed directly by artists themselves.

The San Francisco-based company, which launched Fuzz in Spring 2007, is funded by angel investors. Follow me on Blip here.