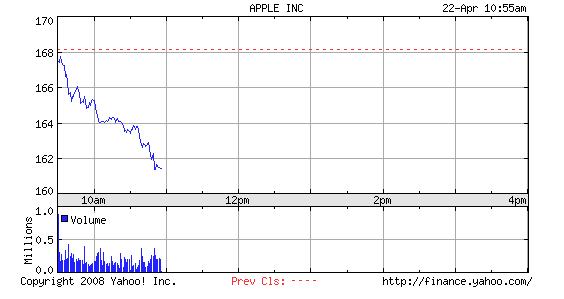 Now that AT&T and Apple are tied at hip with the iPhone, Apple watchers look to AT&T for details on the health of iPhone sales. This morning, AT&T announced a decent first quarter, with profits up 22 percent, driven by gains in its wireless business. The jewel of that business is the iPhone, which commands nearly double the average monthly revenue per subscriber that AT&T gets from other wireless customers, and is helping to reduce its churn rate. Yet during AT&T’s earnings call this morning, Apple’s shares slumped nearly 4 percent in morning trading after rising over the past two trading days.

Investors were hoping for some indication that AT&T blew the doors off its iPhone sales, and some assurance that Apple would hit its goal of selling 10 million iPhones by the end of the year. Anything over one million new iPhone subscribers would have been well received. It doesn’t look like Apple delivered anywhere near that number, since AT&T added 1.3 million net new subscribers across all phones. (It added 5 million gross new subscribers before accounting for churn).

AT&T didn’t break out the numbers of iPhone additions as it has in the past. (When iPhone sales beat expectations, they are not shy about sharing it). By the end of last year, AT&T had activated two million iPhones. But during today’s call, here are the iPhone details AT&T provided (per Silicon Alley Insider):

iPhone continues to be very popular with customers, feedback is very good. ARPUs are in the mid to upper 90s across the base. We continue to see customers adopting iPhone. Over 40% are new to us. Nothing really new in trends there. Continued, solid growth. Through Q1 stable.

We’ll have to wait for Apple’s earnings tomorrow to find out how many new iPhones were sold in the quarter. The number could still be around 1.5 million because other carriers besides AT&T are selling it internationally, and about 30 percent are unlocked. But AT&T still makes up the vast majority of iPhone sales and usage. The big bump in iPhone sales, especially in Europe, won’t come until the 3G version comes out this summer.

But handing over the keys to its network to Steve Jobs was the smartest thing AT&T ever did. That mid-$90 average revenue per user (ARPU) compares to about $50 for all phones. Higher ARPUs and lower churn is what drives profits in the mobile business.