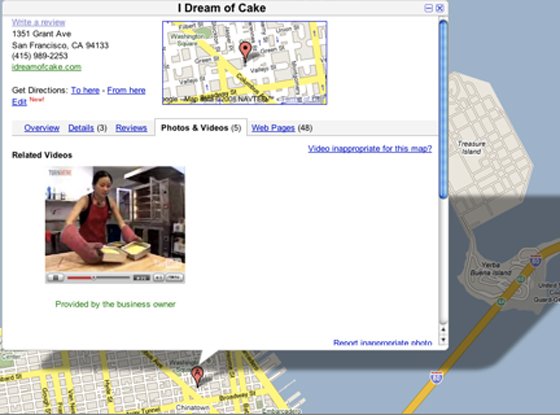 Google has long been using Google Maps as a way to show local business listings. When you search for hotels in a given city, for instance, each digital pushpin that appears on the map can be clicked on to reveal more information, including photos, reviews, and Web links. Now YouTube videos associated with each listing will also appear. For instance here is a video that is embedded in the Google Map listing of a San Francisco bakery called I Dream of Cake (screen shot above).

Combining the power of YouTube with Google Maps should make Google’s local listings that much more appealing. Now any local business can essentially put a television ad on Google Maps. But the most effective videos will be the ones that don’t seem like ads at all, but rather show the real people behind the businesses that are listed.

It is unfortunate, though, that Google chose to make this feature available only to businesses that list on Google. As far as consumers are concerned, they can watch the geo-videos but not create their own.