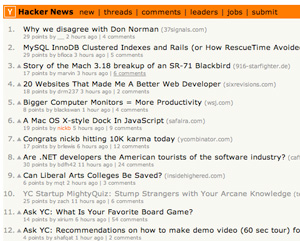 Hacker News, a small but influential digg/reddit-like tech news site hosted at Y Combinator, is asking its users if stories from Silicon Valley gossip site Valleywag should be banned from the service.

Y Combinator founder Paul Graham wrote “Several users have suggested we ban Valleywag, not for anything in particular that they write about, but because their articles are always such deliberate linkbait. I personally agree. In 99% of Valleywag articles, the most interesting thing is the title. But I don’t want to be accused of censorship, so I thought I’d ask for opinions first.”

After 20 hours of voting, 60% of the 400+ people who voted said yes to the ban. One commenter writes “Don’t rely on the tyranny of the democracy. Use this as an opportunity to build a framework based on principle and apply it across the board. When you build constitutions, you have to do it in private, with great minds and based on timeless principles… and weight in fact the true nature of man.”

Based on the voting, Hacker News then banned them from the site.

Hacker News is still in the honeymoon period – it hasn’t yet attracted such a large readership that the trolls have taken up permanent residence. After mentioning them a couple of times and seeing comments asking me to please stop writing about them, I asked the community if they’d prefer I didn’t mention them. The responses were mixed.

It’s clear that the site is aiming for intelligent and thoughtful discussion, so it’s no surprise that they are thinking of banning the toxic wasteland known as Valleywag. The question is, will larger sites, hoping to avoid the Valleywag trolls, begin to ban them, too?