Google showcased HuddleChat, a real-time chat application, as one of many test applications (directory here) to show off their new Google App Engine platform last night.

Some bloggers noted that the application was a rip off of Campfire, a 37Signals product. And 37Signals CEO Jason Fried used HuddleChat as a PR opportunity, telling ReadWriteWeb “We’re flattered Google thinks Campfire is a great product, we’re just disappointed that they stooped so low to basically copy it feature for feature, layout for layout…We thought that would be beneath Google, but maybe its time to reevaluate what they stand for.”

Frankly, the reaction is fairly ridiculous. But this is apparently a fight that Google doesn’t want to be involved in. They pulled the application and replaced it with the above notice.

I wonder if Darren Delaye, Braden Kowitz, and Kyle Consalus, the Google developers who created HuddleChat, had much of a say in the decision. And why, since HuddleChat is not an official Google product, was it Google that made the decision to pull it down and not the developers who created it? Google was very careful to say that they were not affiliated with HuddleChat while it was up – that, apparently, wasn’t the case.

As far as I’m concerned, this is the first case of censorship on the new Google App Engine platform, and a bad precedent.

Our test application for Google App Engine is here.

Update: If you are as outraged as I am over this :-), join this Facebook group demanding that Google bring back HuddleChat. 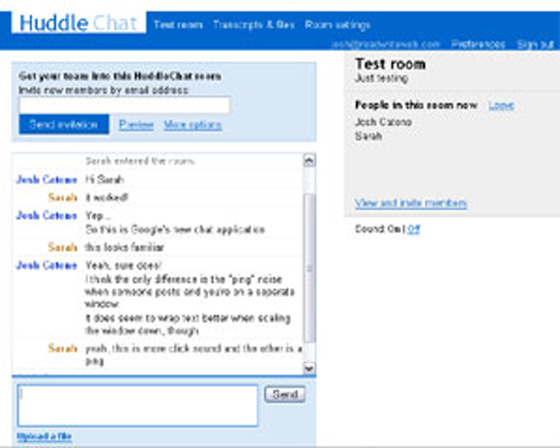