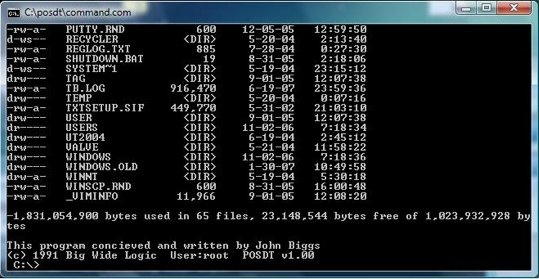 Not that anyone particularly cares, but I recently dug up some work I did way back in 1991 when I was a Bishop Watterson High School sophomore. As a quiet, friendless nerd (except for my equally quiet, friendless friend Rick), I was fascinated by UNIX and found a book at the library that basically showed you how to write all of the UNIX commands (ls, cd, etc.) under DOS. There was another application, a fake command.com that turned your fonts upside down and all sorts of things, designed to scare people using your computer. I think it was called AprilFools or something. That app included C source code and basically amounted to a command.com replacement, albeit a dopey one.

With those two sources in hand and a desire to write my own BBS software (I wrote some software in Turbo Basic, but it was garbage) I began coding POSDT. I knew you could “pipe” applications over the telephone lines so I created a configurable protocol for adding users on the fly and even a method for chatting with logged-in users. None of this ever really worked as I was a rank amateur and not a good programmer, but it worked in my own head, which was all that was important. 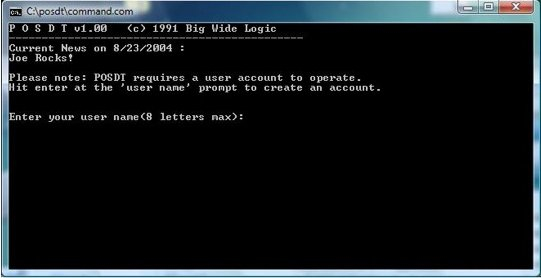 What did I call the OS (actually, it was a shell)? POSDT – Personal Operating System for Data Transfer. Dude. I told you I was freak. I called my “company” BigWideLogic, a name that came to me in the back of my parents station wagon while we were driving to Rice Lake in Canada to go fishing. It has nothing to do with Biggs, I think, and kind of sounded cool. That’s why my personal homepage is BigWideLogic.com.

Now, what is POSDT, exactly. Well, it consists of a shell and some command-line apps. These include a “news” announcement program, “maksmall” (a compression program (I don’t know how it works anymore)) and “mail” which was written in basic and reads .eml text files in your home directory. It has a few protected directories, the protections hard coded in the shell. The “pers” directories contain logs and configuration files and the “user” directory contains user home directories. User root can hang out in all those directories but average users are kept out by the cd application which, as you might suspect, is a fairly silly way of protecting directories. Sue me. I was seventeen.

I believe there was a “tagging” system that allowed you to “watch” files to ensure no one touched them. If someone opened or read them, their information would be stored in the “TAG” directory. To run the system, copy the entire contents of posdt to your C:/ root directory in Windows and run pshell.com. You might be able to run it from another directory, but I’m not sure. I’m a Mac man now and my limited recent testing didn’t include that possibility. Type “help” to get help and “logout” to exit.

Why am I making this available? Well, I’d like to keep the OS for posterity and this is one way of doing that. I was just sitting in my office, wondering where the original 5-inch floppies that contained POSDT are so if I stick it online at least I know someone will have it down the line. I’d also like to share the folly and the ambition of a silly technophile in the heyday of the pre-Internet era. Although I don’t want my son to wear big glasses and acid wash jeans, I’d at least like to him to try his hand at impossible tasks and, in the process, figure out what it is he loves to do. In my case it was a love of furtive masturbation and a dislike of C, but hopefully he gains something more fruitful.

OK. Enough blubbering. Give it a try if you’d like.