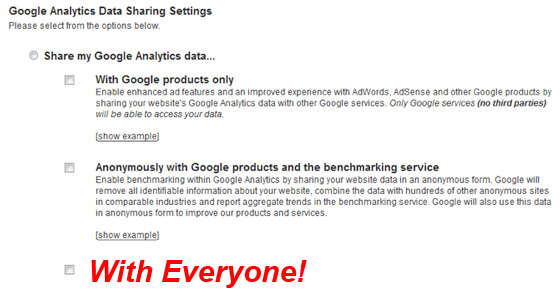 Google Blogoscoped (and the Google Analytics Blog) is reporting that Google is now giving users the opt-in option to share their Analytics data with other Google services, and/or in an anonymous, aggregated way in a new benchmarking service.

This is certainly useful for some companies – particularly since Google is only making new services based on this data available to users who’ve opted in: “only users who have opted to share their site’s data with Google may use these new or improved services.”

A screen shot of the options is above – but I’ve added my own fantasy third option in addition to the first two that Google announced today.

What I want to see is a flat out option for people to share some or all of their Analytics data publicly, without restriction and without anonymitiy. We’re seeing startups send us this data more and more often to counter under-counting in Comscore, Alexa and other services. They say they’re more than happy to see us publish the data, so readers will understand exactly how well they’re doing. A lot of companies want this data to be public.

Transparency is a good way to gain the trust of the community, and I think Google would be surprised to see how many customers would be perfectly willing to share their analytics data publicly. The logistics of the sharing is less important – it could be done via a widget or an API, or a variety of other methods. But I believe the demand is there. All Google has to do is flip a switch.