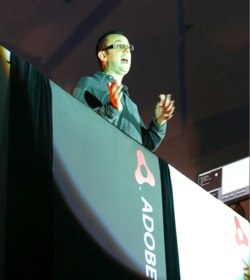 I attended the official launch party for Adobe AIR (Pacific Region) today and as much as the tech is impressive, I walked away with one strong observation: this is a user base war.

Adobe’s Pacific technical director Mark Blair gave the keynote, and I can sumarize it as such: online apps offline, platform independent, everywhere. There was a Q&A after the keynote that added to that, but the only main new addition I got from that is that AIR should be coming to Linux this year.

During Blair’s presentation was a slide on the companies developing AIR apps. Some we’ve covered already, like eBay, then there were other names like the NASDAQ developing with AIR. Locally the Commonwealth Bank was developing an AIR app for Brokers. There was also some impressive demonstrations post show, including a TripIt clone that runs on AIR (post still to come).

There’s no arguing that AIR is highly capable, but so is Microsoft’s Silverlight. Adobe and Microsoft have entered a war of attrition, where like HD DVD vs Blu-ray one will eventually come out on top. Having said that both may well happily co-exist side by side for years to come, but history shows that eventually the market will pick a favorite.

Disclosure: Adobe Australia paid for my trip to the launch