Below is the transcript, in reverse chronological order, from the Steve Jobs keynote at the Macworld Expo. Thanks for tuning in!

10:44am: Newman stopped talking, Steve thanked everyone for coming, lots of applause, it’s over.

10:40am: lots of political references and he compares Bush to Ceasar and the Spanish Armada. Very political and Republicans wouldn’t be happy

10:38am: 3 minutes later and the Newman is still rambling about god knows what. Some movie references are funny, but I’m waiting for the hook to come on stage to get him off

10:35am: Newman finishes signing and is now talking about SJ being a hard act to follow, then cracks some jokes.

10:34am: wow, the song is heavily political, Republicans wont be happy. Jokes about the high court, referring to the US Gov as an Empire with comparisons to the Spanish Armada. I’m just waiting to SJ to endorse a candidate 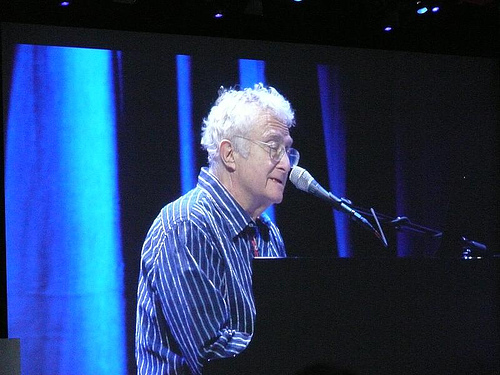 10:33am: Newman signing song in defense of America, starts by saying the leaders in the US aren’t good, but not has bad a Caesar….seriously.

10:30am: Randy Newman to sing on stage to finish off proceedings. SJ notes his achievements in movie scores etc… 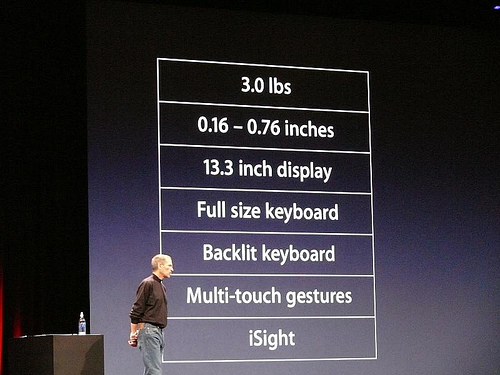 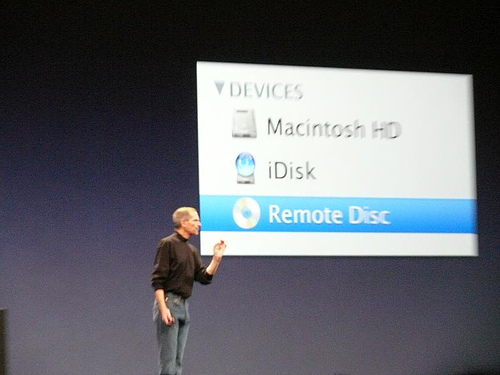 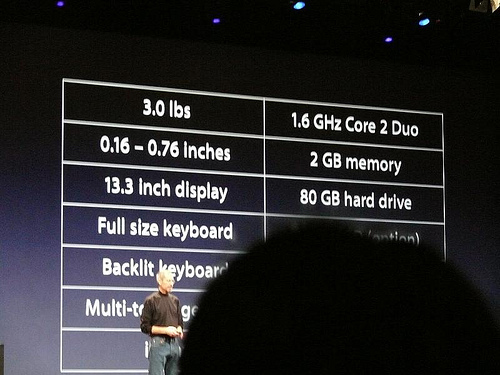 10:28am: the 4 major things SJ wanted to talk about have finished. Now reviewing the announcements 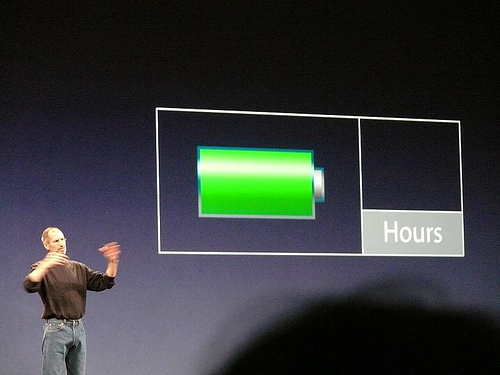 10:27am: Macbook Air: it’s “green”. Mercury and Arsenic free LCD and glass, Aluminum frame can be recycled. PVC free on circutry, and packing is less

10:26am: First Air video demoed. The brown envelope is the key to the campaign to emphasize the size

10:23am: 5 hours battery life for Macbook Air, compared with competitors at 1 1/2 hours

10:21am: new feature: “remote disk” that will allow you to install software from another computer 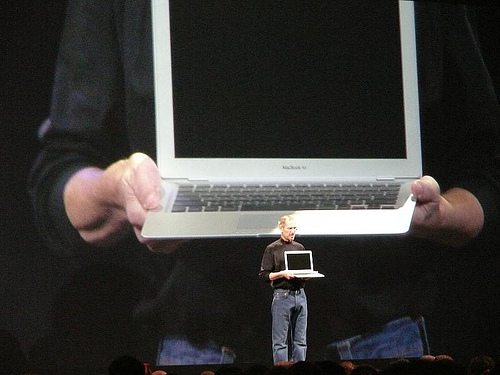 10:14am: expanded gestures support (including Microsoft surface style functionality, rotating photos from the track pad etc, zoom in via pinching) 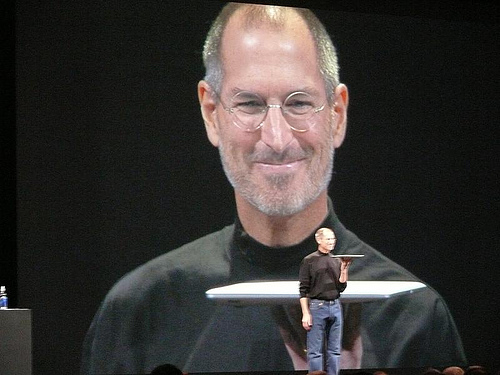 10:13am: comes with built-in iSight and full size keyboard that’s back-lit as well

10:11am: SJ pulls it out of a standard inter-office/manila envelope (that small). It’s incredibly thin. 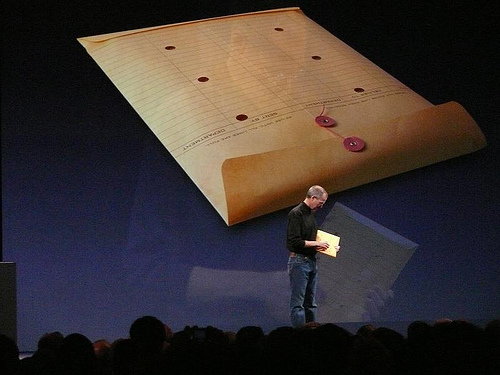 10:11am: 0.76″ at its tallest end to an amazing 0.16″ at shorter end. SJ notes that at its thickest end, its still thinner than the thinnest offering from Sony. Crowd Laughs

10:10am: SJ is going through failings of competitors, saying that there is too much compromising from competitors 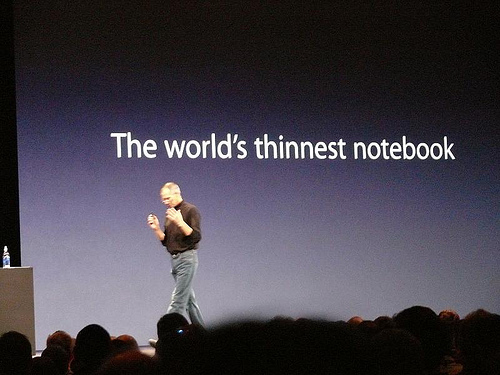 10:09am: SJ says its the “world’s thinest notebook,” comparing it to a Sony before the introduction

10:07am: SJ back, and it’s the last of the 4 announcements: “There’s something in the air”. SJ says that Apple makes the best notebooks in the business 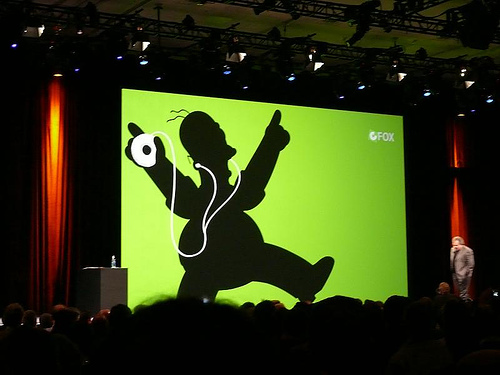 10:05am: Gianopulos explaining the Apple/Fox deal with a Homer Simpson iPod graphic. 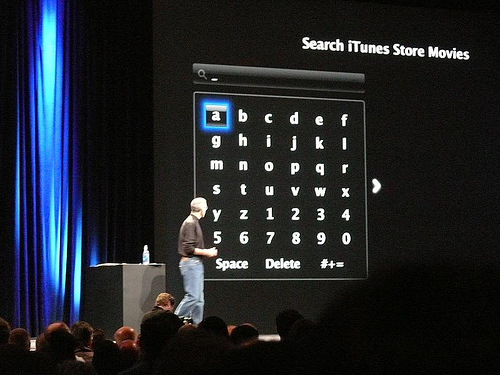 10:00am: New features are a free upgrade to the existing Apple TV. Crowd cheers

9:58am: Ooh, Flickr didn’t want to work with a blank screen. First hiccup of the speech

9:57am: Apple TV now comes built in with Flickr support, including friends browsing.

9:56am: another demo…..this time fish, at least they looked Australian 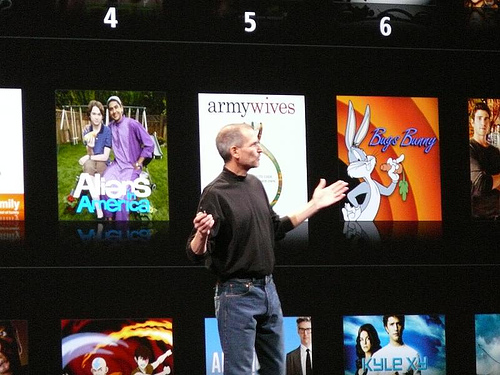 9:55am: more demos of content, this time photos with music, SJ calls it “incredible,” maybe I need some hype pills because all I’m seeing is photos….with music

9:53am: More demos of content on the new Apple TV. Music videos, music, video, podcasts and more, including HD podcasts 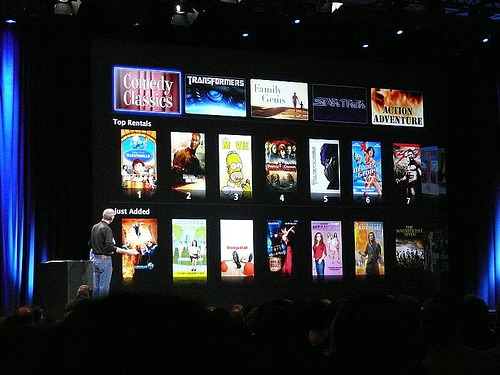 9:48am: One button interface for iTunes rentals on Apple TV. Remarkably simple to use, at least in the demo

9:44am: HD for Apple TV with Dolby 5.1 all from the unit without a PC. Also built in support for video and audio podcasts all without the need for another computer

9:43am: Moving on to TV. Everyone has failed, TiVo, Microsoft, and Apple. Apple TV “Take 2” with no computer required, built in rental support

9:42am: Clarification: US only today, International later this year

9:41am: Rentals can be easily moved between devices and are available from today as an iTunes update

9:39am: 1,000 films by the end of February, will have films 30 days after DVD release, will be viewable on PCs, Macs, iPhones. Will be available instantly, 30 seconds on fast broadband. Rules: you have to start watching it, 24 hours to finish

9:38am: Lots of library titles such as Hunt For Red October, Matrix. Strong emphasis on a depth of offering

9:37am: movie content sales not working as great as expected, so today launching “iTunes Movie Rentals” 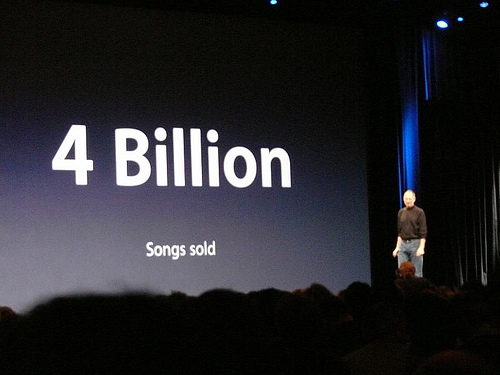 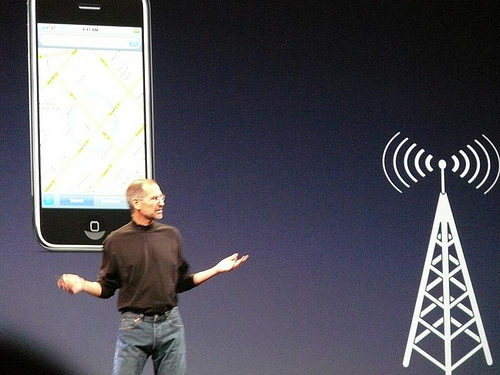 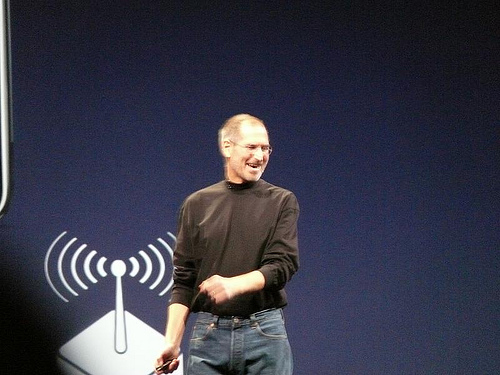 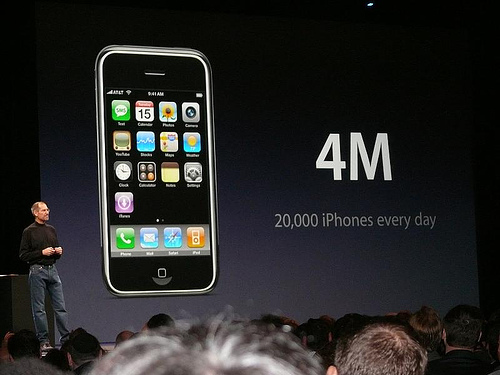 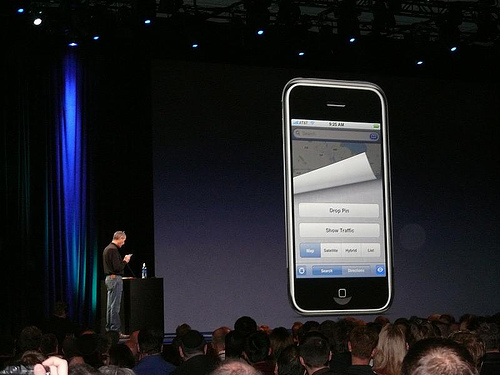 (9:29am: Apple Store has been taken down from site)

9:28am: Steve Job is demoing the new iPhone functions. The location finder in Maps is good, but not unique. Multi-sms good as well. Web clips impressive, however its what’s been previously covered when 1.1.3 was leaked a couple of weeks back 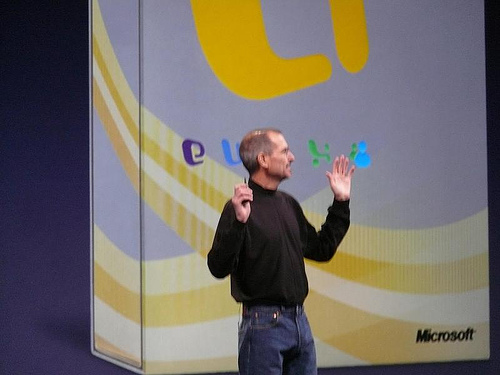 9:21am: Steve moves to iPhone. Apple has sold 4 million iPhones to date. Marketshare in the US is an amazing 19.5% of the smartphone market

9:18am: first major announcement: a wireless backup appliance, essentially a HD that looks like a Mac Mini — called “Time Capsule”

9:16am: 20% of the Mac install base has upgraded to Leopard, unprecedented in the industry. First Drink: SJ quotes Goatberg saying Leopard is better than Vista

9:15am: Steve Jobs comes on stage and says there’s something in the air today. Goes on to recap 2007

9:13am: lights are dimming. Get ready everyone.

7am: early risers were queued four deep for a block around the Moscone Center West waiting for entry into the keynote. 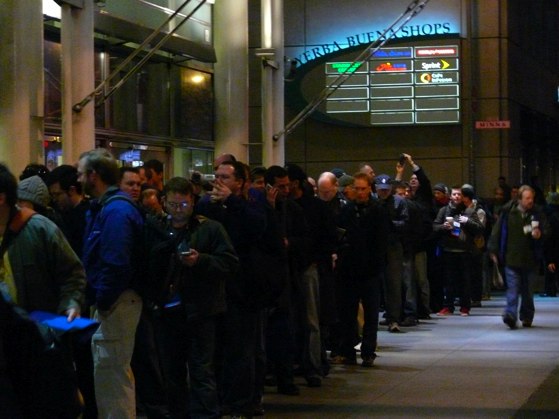