When I was younger and addicted to PC games like Total Annihilation and Sim City, my parents figured I was flushing priceless hours of my youth down the drain and actively tried to get me to cut back on playing.

Jared Kim, a nineteen-year-old Berkeley dropout, has taken a similar obsession of video games and turned it into something his parents can certainly be proud of: a new website called WeGame that provides both the place and the tools for gamers to share screencasts of their favorite in-game moments. As Kim puts it, the launch of WeGame is like launching YouTube and giving everyone video cameras, because WeGame not only provides a place to upload and share videos, it provides the tools necessary to create the video content itself.

Capturing screencasts of gameplay is currently difficult because recording programs hog system resources, thereby slowing down the games themselves. They also don’t tend to output video files that are compressed well enough for upload. And if you’ve ever tried to convert and resize video clips, you know how much of a pain that is. 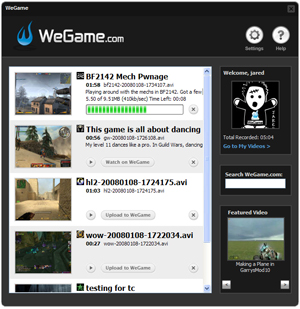 WeGame steps in by providing a free desktop client that works tightly with DirectX to capture screencasts from within games without slowing them down significantly. It also outputs those screencasts to AVI files that are small enough for quick uploading to the web, a process that occurs from within the client itself. To record a screencast, just hit a special key while in-game to start and then stop recording. Once you’ve exited the game, you can click the “Upload to WeGame” button, choose a title and description, and the client will convert the AVI file to Flash and publish to the WeGame site directly. Check out a screenshot of the client to the left to see what the interface for this looks like.

The WeGame site itself is much like YouTube, except with a strict focus on game screencasts. You can browse, search, and comment on videos just like you’d expect from a video sharing site. The hope is that gamers will enjoy watching clips of each others’ gaming experiences, and perhaps produce hit clips like Leeroy Jenkins from World of Warcraft. Game studios love this sort of content because it’s free promotion for their products. 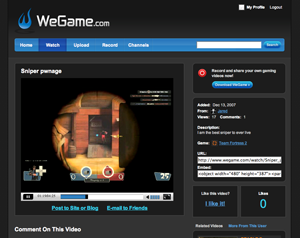 WeGame’s desktop client is currently for Windows only, as most games are built on top of Microsoft’s DirectX technology. The client supports the recording of 16 games with more to come over time. Screencasts can be uploaded in two modes: “web” or “HD”, the former being 640 pixels wide and the latter being 1280×1024 in dimension. Both stream at 600kbps as opposed to YouTube’s 300kbps. The company is also working to provide a recorder for casual games that are played through the browser.

Kim and his team of four have been working on WeGame for six months and have raised $500,000 from True Ventures and Naval Ravikant’s HitForge. The company’s advisers include Dennis Fong, Quake world champion and founder of Xfire, and Matt Mullenweg, founder of WordPress. WeGame is actually Kim’s third company; the first was started in China and focused on creating a matchmaking tool for online gamers. The second was a Dodgeball-like application for college students. He also comes from a tech family of sorts; one of his sisters, Jade Calacanis, is married to Jason Calacanis and another, Joyce Kim, co-hosts the GigaOm show.