HaloScan, a company that provides easily deployable commenting systems for over 489,300 sites, has partnered with JavaScript module provider JS-Kit to provide its user base with “one-click” deployment of JS-Kit’s ratings widget.

HaloScan users can now go into their regular commenting system control panel and check a box to show JS-Kit’s ratings widget alongside their comments. JS-Kit provides a number of widgets including its own commenting system, reviewed quite awhile ago, that will complement, not replace, the system offered by HaloScan. 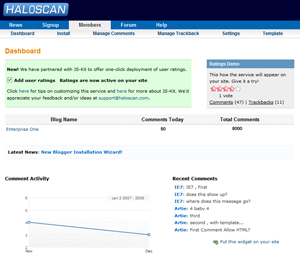 While the ratings widget now comes as an optional feature alongside HaloScan comments, it does not have anything to do with the rating of user comments (as is the case with several commenting systems like SezWho). Rather, users are supposed to click on JS-Kit’s 5-star ratings badge to rate the content of the page, which probably displays a news article given the typical HaloScan-enabled site (DailyNews of Los Angeles and The Olympian are a couple of the bigger ones).

JS-Kit CEO Khris Loux is emboldened by this partnership because he believes that scale and prevalence are very important for startups that provide extra functionality for existing websites. He also expects a shakeout in 2008 among such service providers as those that fail to gain traction die off. We’ll just have to see how much room the market has for multiple providers of commenting, rating, review, and polling widgets (I imagine quite a lot). But if he is right, this could very well prove to be an important first distribution deal for his company to make.