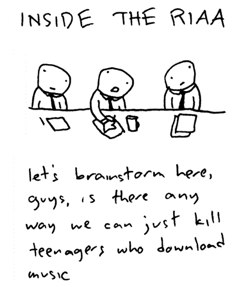 The RIAA has lodged documents in the ongoing case of the Record Industry vs Jeffrey Howell that argues that ripping music from legally purchased CD’s is illegal.

If the Judge rules that the RIAA is right, any person in United States who has ever ripped a legally purchased CD will become a copyright thief and a potential target of the RIAA, and that means just about every iPod owner in the country.

The case itself may not find in favor of defendant but not rule that CD ripping is illegal. Howell is accused of sharing files via Kazaa, but his sole defense is that he did not share those files and they were for personal use only, hence the RIAA’s disturbing argument.

Where do you start in arguing against the abhorrent greed of the record industry? It may be one thing for them to fight a losing war against those who don’t pay for music, but to then go one step further and suggest that people who do the right thing and buy their music are criminals because they want to play their music on an iPod is beyond sane belief. If the argument is successful the only salvation for American’s may be Congress passing laws like other countries have that makes personal copying legal, but don’t hold your breath; Congress is too busy trying to pass laws that would strengthen copyright sanctions (such as with the PRO IP Act) and copyright offenders don’t make sizable donations to election campaigns, do they :-)