Magnify.net, hitherto a platform intended primarily for collecting and sharing videos found around the web, is broadening its focus with the release of a service that lets you record video clips directly into the browser using a webcam.

While such functionality is nothing groundbreaking, Magnify.net is apparently hoping that its method of collecting video recordings in so-called “channels” will make it a platform of choice for video bloggers. It is touting an ongoing series by Chris Brogan called Attention Upgrade to illustrate the potential of these channels, which display clips (ironically with text descriptions that summarize their content) in a blog-like, reverse chronological fashion. 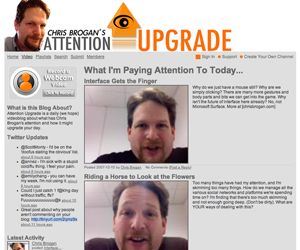 The most notable thing about these channels seems to be the ability for other Magnify.net users to leave comments in the form of videos as well (although apparently only to the channel as a whole, not particular “posts”). If the company were to add the ability to add comments to posts themselves, I wouldn’t be surprised to see this platform facilitate the types of conversations developing on the new Seesmic. In fact, we could see better discussions emerge since they’d have a clear topic of conversation (the video blog post itself) on which to focus.

In any case, count this new feature as another development in the conversational video scene that also involves the likes of Justin.TV and Kyte, and could really come of age in 2008.