Last month, I asked comScore to run some numbers on traffic to social sites (comScore calls them social networking sites, but they are not all social networks). This month, I asked them to do the same run again for October, 2007. Below are the results, which show both absolute traffic in the U.S. and percentage change where comparable data from October, 2006 is available. I organized them a little bit differently this time. Sites showing year-over-year growth are in the first group (Facebook, Flickr, Digg), those showing declines are in the second group (Geocities, MSN Groups, Xanga), and blogging platforms are in the third group because I consider them a separate beast altogether: 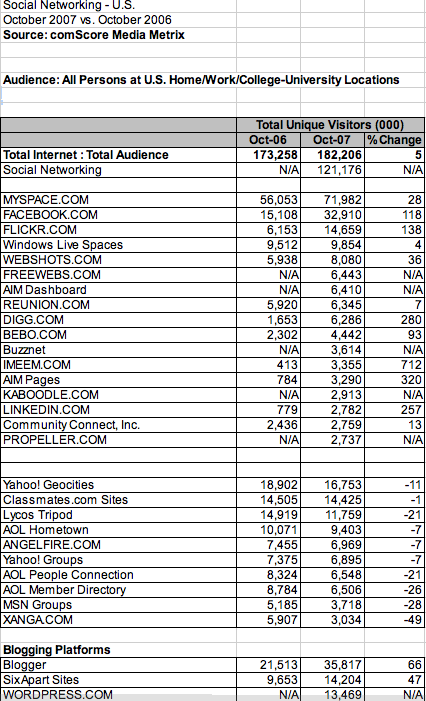 —LinkedIn, Digg, Flickr, Facebook, Imeem, and AIM Pages are all growing more than 100 percent year-over-year.
—Wordpress is also on a tear, gaining 1.6 million unique visitors from the previous month alone, more than Six Apart’s one-month gain of 800,000, but still behind Blogger’s 3.9 million (see last month’s post for comparable numbers).
—AOL’s Propeller (its Digg clone) is doing better than expected, with almost the same number of visitors as LinkedIn.