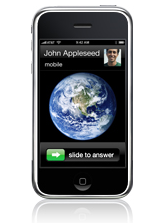 What can we glean about how the iPhone is doing from AT&T’s and Apple’s earnings calls? Last quarter, AT&T Wireless had a net gain of 2 million subscribers, its best quarter ever. Apple sold 1.1 million iPhones in the quarter (and 1.4 million cumulatively). Though some portion of those were already AT&T Wireless subscribers, it is safe to say the iPhone deal is working for AT&T and helping to push its overall net subscriber numbers up. Other tidbits:

—On the Apple earnings call, CFO Peter Oppenheimer cited some research from Strategy Analytics placing the iPhone as the “fourth highest selling handset in the U.S. market in the September quarter.” (The Motorola V3 was No. 1).

—Apple has sold 1.4 million iPhones in a little over a quarter. It took the iPod more than two years to reach the same number of sales. The price cut helped it reach that number, by nearly doubling the daily sales of the iPhone. And Apple says it is on track to sell 10 million iPhones by next year.

—Of those 1.4 million iPhones, Oppenheimer estimates 250,000 (or 18 percent) were unlocked to work on networks other than AT&T. (That explains why Apple was so aggressive in bricking those iPhones. Apple only gets paid by AT&T for iPhones connected to its network).

—The iPhone starts selling in the UK (with O2) and Germany (with T-Mobile) on November 9th, and in France on November 29th (with Orange).

—Apple’s retail strategy continues to power an increasing portion of its sales. In the September quarter, 57 percent of Apple’s sales were direct through its stores or Website, compared to 53 percent a year ago.