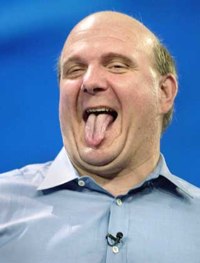 The hot topic on Techmeme today is a story quoting Microsoft Chief Executive Steve Ballmer claiming that the rush into sites like Facebook could be a fad. Naturally, there has been a slew of people claiming that this could be nothing further from the truth; Robert Scoble puts forward one of the better arguments against Ballmer.

But what if Ballmer could be right?

Lets look at the exact quotes for some context:

“I think these things [social networks] are going to have some legs, and yet there’s a faddishness, a faddish nature about anything that basically appeals to younger people,”

There is absolutely nothing wrong with this statement. Some social networking startups will have legs and will last for a long time, a whole lot of them wont. MySpace was hot 2 years ago, Facebook is hot today, what’s to say the latest fad isn’t around the corner tomorrow?

Consider the Dictionary definition of fad:

“A fashion that is taken up with great enthusiasm for a brief period of time; a craze”

Hasn’t the rush to embrace Facebook been a craze? and certainly people signing up to use Facebook are doing so with great enthusiasm. The question then becomes whether the craze is short term or long term? Anyone remember Friendster?

There can’t be any more deep technology in Facebook than what dozens of people could write in a couple of years. That’s for sure,”

Mr Ballmer also noted that sites such as Geocities, an online community that was bought for $3 billion by Yahoo! in 1999, at the height of the dot-com boom, “had most of what Facebook has.”

The Geocities comparison isn’t totally accurate because as a Geocities user from around 1995-1998 I don’t recall there being a lot of strong social networking aspects, although there were “neighborhoods” where you could connect with people. But in the broader context Geocities was a fad, a site that went supernova with traffic only to fall away when others provided (often better) alternatives.

Ballmers right on the tech side: Facebook’s backend could be duplicated over time, so can Facebook last over the longer term and not be replaced by a new site/ fad?

That question is yet to be answered.

I’ve been positive on Facebook because unlike MySpace I get the appeal of Facebook, although unlike many others I’m not religiously using it every day. I think that Facebook will likely last the distance, but that’s not a 100% sure bet.

What I can say with absolute certainty is that the management of Facebook will be considering the longer term viability of Facebook as well, particularly given the massive growth over the last 12 months that can’t be sustained for ever. Facebook have the advantage of being able to learn from the mistakes of others in the past, but even with that knowledge history can often repeat itself. Facebook’s number one challenge today is turning the Facebook fad into a long term, sustainable business.

Nothing of what Ballmer has said is intrinsically wrong, particularly from a business viewpoint. Ballmer’s role at Microsoft in terms of investments and acquisitions is to try to pick the winners, and a big part of that is considering whether some (or all) social networking sites are fad, because there is one thing for certain: some of them will be, as many have been in the past.