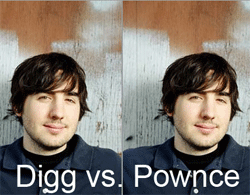 I’ve speculated previously on the growing conflict Kevin Rose has between his roles at Digg and Pownce, and now it would appear that we may finally be on the eve of Rose being forced to decide between the two.

Leah Culver, a co-founder of Pownce with Rose has made a bizarre post to Digg suggesting that Digg’s new features were a direct copy of those from Pownce:

Since I originally came up with the Pownce gender list, I’m somewhat miffed that Digg copied Pownce.

Culver also linked to an image on Flickr which she subsequently deleted.

The first and most obvious question: has there been a complete break down in communications and trust between Pownce’s founders that they now find it necessary to air their dirty laundry (ironically) on Digg? Second: why did Culver delete the picture after posting the link on Digg? Was pressure brought to bare?

As much as we all admire Kevin Rose’s tenacity and creativity, there is always a point where you can be wearing too many hats. Rose has three (Digg, Rev3, Pownce), which I’m guessing is at least one too many, possibly two.