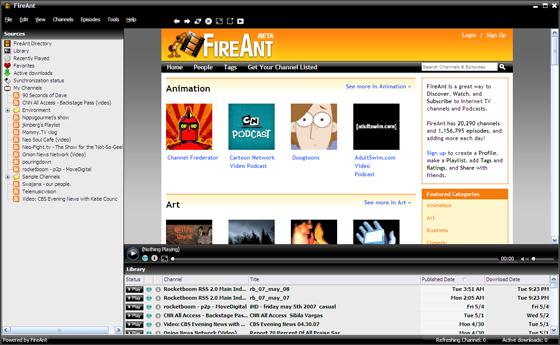 If you know who FireAnt is, you either love podcasts or you’re a long time reader of this blog. The company built up a cult following in 2005 and 2006 as the podcast directory and player, and competed head on with Evan Williams’ Odeo for mindshare and users.

FireAnt’s assets were acquired by Odeo for $400,000, they companies will announce today. Not the old Odeo, but Sonic Mountain, which renamed itself Odeo after acquiring it earlier this year. For less than $2 million, Sonic Mountain has now put two of the more well know podcasting brands together under one roof.

The acquired assets include FireAnt’s technology, particularly their desktop media player for Windows and Mac, as well as FireAnt’s database of feeds and metadata. Founder Josh Kinberg joins Odeo to lead product development and integration of the Odeo and FireAnt technology.

Everything will be branded Odeo from here on out, so take a good look at that screenshot. If you are a FireAnt user, it will be changing significantly soon.