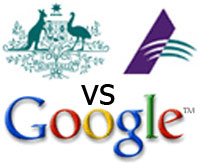 Google appeared before the Australian Federal Court today facing charges from the Australian Competition and Consumer Commission (ACCC) that it misleads customers.

In a submission to the court, ACCC barrister Christine Adamson stated Google was misleading people who thought the ranking of its search results was not influenced by payments from advertiser. Adamson said that Google “represents to the world that its search engine is so good that it can rank, out of the multitudinous entries of the worldwide web, these entries in order of relevance of the user’s query. Part of that (reputation is) that it’s not influenced by money, it’s influenced by relevance.”

See our previous coverage here for the full details of the case. The hearing was adjourned until October 4.

In related news, submissions to the ACCC’s inquiry in to the competition implications of Google’s acquisition of DoubleClick close tomorrow. The inquiry is considering whether Google’s acquisition would be illegal under Australian law. Although both companies are American, both have a local presence so in theory Google could be forced to divest itself of DoubleClick’s Australian arm.