Last November, Munjal Shah made a fairly tough decision and did an about face on his startup, Riya. Instead of continuing to focus on Riya’s existing product – facial recognition and tagging of photos – the company took its core technology and launched an image search engine called Like.com.

Unlike other image search engines, Like.com uses photos as the query, returning similar images as the results. The company focused on ecommerce, particularly fashion items like handbags, watches, shoes, etc.

Fast forward to nearly a year later. The company is generating real revenue from sales on the site – Current gross merchandise sales are running at about $12 million per year (Like.com gets a small percentage of that as an affiliate fee in revenue). 1 million or so unique visitors come to the site each month. 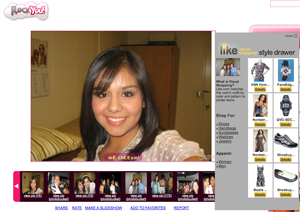 This weekend photo widget startup RockYou started to integrate Like.com results into slide shows shown on the RockYou site (example). For now, results are limited to showing shirts on sale that are similar to the ones being worn by people in the photographs. Viewers can click through and purchase a shirt that look similar to the one their friend is wearing in the photos.

So far, so good. Shah says they are seeing an $0.80 CPM on slide show pages and sharing the revenue wtih RockYou. Other partnerships are ready to roll out.

Slide shows with Like.com results are only being shown on RockYou.com currently – due to issues with advertising on social networks (particularly MySpace), they are not included in the embeddable widgets. It’ll take a whole new round of negotiations before we start seeing them there, too.