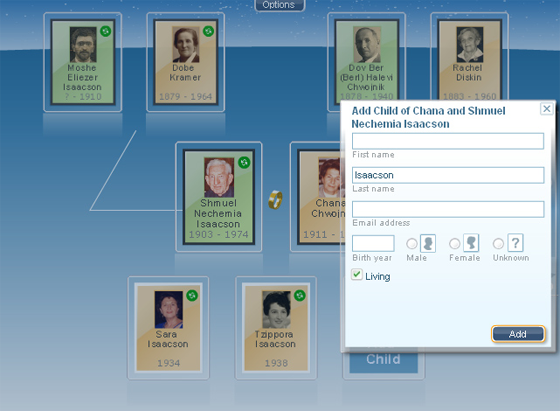 Israeli startup MyHeritage was a bit of a sleeping giant. Until newcomer Geni came along and shook up the genealogy world with its slick new viral family tree application. Geni quickly reached 5 million people profiles and a monster $100 million valuation just a few months after launching.

MyHeritage has been around since 2005. They’ve quietly raised $9 million in venture capital (about half from Accel and half from two angel investors, Yuval Rakavy and Aviv Raiz). Until recently MyHeritage required users to upload family genealogy information from desktop based software. The information was viewable online but no changes could be made. An unwieldy system, but they still managed to gather 150,000 family trees with 180 million people profiles from 17.2 million users. 150,000 new profiles are added daily. That dwarfs Geni, although MyHeritage had a long head start.

A couple of weeks ago MyHeritage unveiled a number of fundamental architectural changes to their service. They’ve taken the best features of Geni and married them to the stuff at My Heritage that has worked over the past couple of years.

Users can now upload data (name, email, born/died dates, photos, etc.) directly on the MyHeritage website in addition to the client, choosing from17 different languages. The user interface, which like Geni is in Flash, shows a couple of different views to quickly move around a family tree. Over 100 million photos have been uploaded to the site, and users can tag faces with names an attach them to user profiles.

That isn’t all MyHeritage is up to, though. They acquired Pearl Street Software late last year. That acquisition brought matching technology to the company which allows the service to compare family trees to find overlap – even if names are spelled differently or the basic data is somewhat off (slightly different birth or death dates, for example). They are just beginning to roll out the matching service, but they expect to see a lot of overlap between family trees. If both sides agree, the trees can be merged at appropriate places.

MyHeritage hopes, like Geni, to one day have much of the world’s genealogy mapped online. Given that 1 billion people are online today, MyHeritage’s 180 million people profiles is a good starts towards reaching that goal. They eventually hope to have 3 billion profiles, including people who’ve passed away. And at that point the family relationship between any two people in the world is just a mouse click away.

It’s a grand vision, but one that is likely to be achieved someday by MyHeritage or one of their competitors.

As an aside, MyHeritage also has a robust (and free) genealogy metasearch engine that taps into 1200 genealogy databases around the world.