“Crowd sourced” news network NowPublic.com has closed a $10.6 milion series A round of financing led by Rho Ventures with seed investors Brightspark and the Working Opportunity Fund participating.

Crowd sourcing is part of the widely expanding “citizen journalism” category, which encompasses all the new ways non-professionals can participate in the news reporting process. Examples range from commenting, voting on stories, to full out blogging. News commentator Jeff Jarvis has written extensively on the subject. NowPublic is a website that provides these tools to the public so they can report on what is going on around them. Many other news startups also incorporate these tools in different ways, such as NewsVine, OutsideIn, Digg, CitizenBay, recently Topix, and the now defunct Backfence.

On the spectrum of citizen journalism, NowPublic is considered a “crowd sourced” news network since stories rely on many bits of contributed content instead of a small group of users. 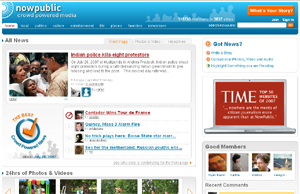 On NowPublic, anyone can sign up for the site and start contributing to stories in the usual categories (politics, culture, entertainment, …) or even local news. Users can write their own stories and upload their own photos (mobile), or simply submit a story from somewhere else on the web. Each of the submissions ranked in the category based on the number of votes they get. Editors can also come in and adjust the rankings based on breaking news and spamming.

Traction is one of the hardest things to build in community based startups. Citizen journalism startup Bayosphere was shut down after it couldn’t attract enough contributors. However, NowPublic reports to have over 118,000 members from over 140 countries and 3,800 cities. The site does over 1 million uniques per month. They have a hardcore audience of about 15 – 20,000 exceptionally active contributors that put up anywhere from 2 to 5 stories each month.

NowPublic seems to work best in times of crisis where it can serve as a hub for reports from people on the ground. During Hurricane Katrina, the site received over 2,000 people writing and posting about what was going on. NowPublic also reportedly broke news in the Virginia Tech shooting, the grounding of an Alaskan ferry, a bombing drill gone wrong in New Jersey and a murder in Vancouver.

The ability to be places where news media aren’t always present has led to a partnership with the Associated Press. AP has started purchasing stories and photos from the site based on the submitters asking price. NowPublic can cover areas AP’s 4,000 staff members aren’t and will be particularly focused on hurricane prone parts of the country as hurricane season approaches. While they are currently not taking any portion of the proceeds, in the future NowPublic plans on taking 25% cut. They have 7 to 10 other major partnerships lined up as well.

The Vancouver-based company was originally started in 2005.