Virtual world Entropia, which combines chatting with friends and blowing up aliens, announced their expansion into China through a deal with Beijing’s Cyber Recreation Development Corp (CRD) over a year in the making. The CRD is supported by Beijing’s Municipal government and intended to promote and develop investment in “cyber recreation” in China. The company says Second Life was also in the running for the deal.

The deal is quite ambitious. Entropia currently has over 500,000 registered users, but the new Chinese partnership will permit up to 7 million concurrent users with an overall aim to attract an unheard of 150 million world wide. The company also expects their virtual economy’s bottom line to grow, eventually adding another 1 billion real dollars annually from the partnership. Entropia has already been able to sell a virtual banking license for $400,000. David Liu, CEO of CRD, envisions an Entropia utopia. He expects the partnership to bring 10,000 work-at-home, pollution-free job opportunities to China.

Entropia also plans to expand their virtual real estate from the deal by enabling media companies to add their own planets to the universe. They’re currently in negotiations with film, music, and gaming companies for their own planet. Competitor Second Life has made several similar corporate branding deals in their virtual world.

Entropia still faces competition from Second Life in China and their own home grown competition from HiPiHi and a TBA world from Shanda Corporation. Second Life’s top entrepreneur Anshe Chung has even been running operations out of China since last January. However, adult themes and continued investigations into illegal activities within the virtual world (child abuse, stalking, gambling) don’t bode well for getting the seal of approval of a government that blocks Wikipedia. 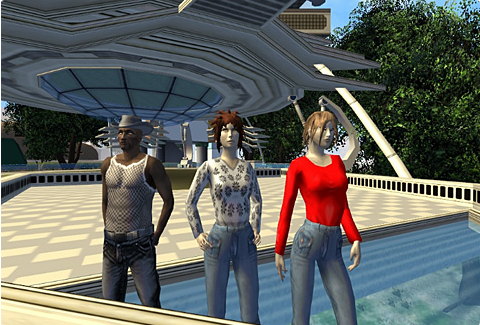