When Charles River Ventures announced its Quick Start program last year to provide a few hundred thousand dollars to startups on an expedited basis, it caused minor ripples in the Angel funding market.

For entrepreneurs it was another option for raising capital, but more than one angel investor we talked to was a little nervous about the big funds moving in on their very lucrative investments. They clearly hoped it wasn’t a trend that would be duplicated by other large funds.

CRV said they’d make 25-50 investments through Quick Start in the first two years. After six months, they are on track to do about 40 investments. Nine have been completed so far and were disclosed at a Stanford Business School quick pitch event I attended this afternoon. Three of these have completed a subsequent Series A round – Mobeus, Aveksa and Samplify. We’ll be covering a number of these in the near future. The average investment size was $250,000.

It’s still too early to tell if these investments will pay off, but CRV is doing very well overall. They say their 2000 fund will return 2-3x to limited partners, an excellent return by any measure, particularly given the 4 year nuclear investment winter from 2000-2004. 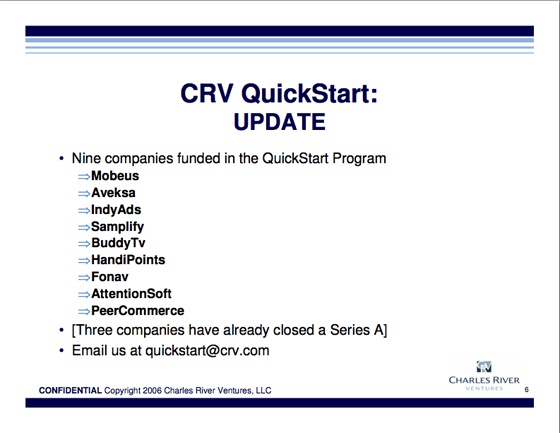