David Friedberg, a former Googler, is set to launch an ambitious new site called WeatherBill, headquartered in San Francisco, in the next few weeks. WeatherBill won’t be a consumer site; rather, they are combining an ecommerce site with a complicated weather forecasting algorithm to sell weather insurance policies to individuals and businesses. And having a business isn’t a requirement to purchase a contract on WeatherBill – users can also use it to simply make a cash bet on the weather swings in a given geographic area.

Weather insurance is difficult to get and even harder to customize. Enron began to dabble in weather-related securities, who’s value would fluctuate based on actual weather down the road, but that all ended in 2001 when the company went bankrupt. Today, large energy companies trade weather policies back and forth to hedge against high or low temperatures, but everyone else is left out. 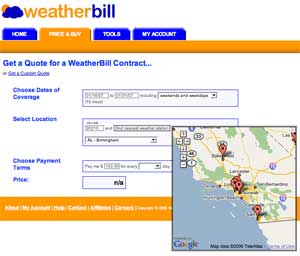 That’s where WeatherBill will come in. Anyone can buy an insurance policy for weather in a given area. Choose a weather station via a Google Maps mashup (see screenshot to right) and choose whether you want it to pay out for each hot, cold, rainy or dry day. Temperatures are set by the user by degrees, precipitation by inches. As an example, if I want to be paid $100 for every very rainy day (1/4 of an inch or more) in San Diego in March 2007, that policy will cost $370.64 and will pay up to a maximum of $3,000. Every option is variable, and so the user can decrease the amount of rain required, increase the maximum payout, etc., via an Ajax interface. A contract for a payout of as little as $1 can be created.

WeatherBill hedges their own risk via their weather algorithm, which Friedberg tells me they use to simulate 20,000 years of weather daily for each weather station. They also sell their risk on the back end to a number of hedge funds. The result is guaranteed profit for them, regardless of the weathler. All they have to do is sell policies.

WeatherBill may be useful for golf course owners, movie theaters, amusement parks and other businesses whose business varies significantly based on that day’s weather. I would imagine that having this built into things like Quickbooks and other online accounting software would be a great feature for many small businesses. The only requirement to purchase a policy is that the individual or business is an “accredited investor,” meaning they have a net worth of at least $1 million. The user has to certify this when creating an account, but no follow up is done.

WeatherBill is has raised a Series A round of financing from NEA, Index Ventures and a number of angel investors. Look for a launch in the near future. Additional screenshots below (note: these are from an early demo, and will probably change somewhat by launch). 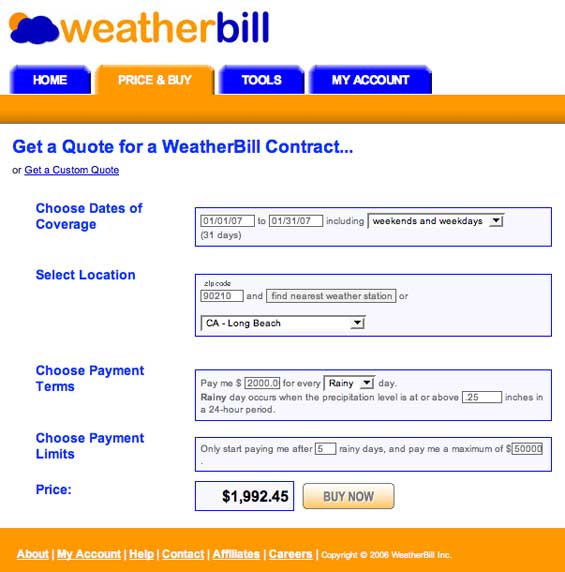 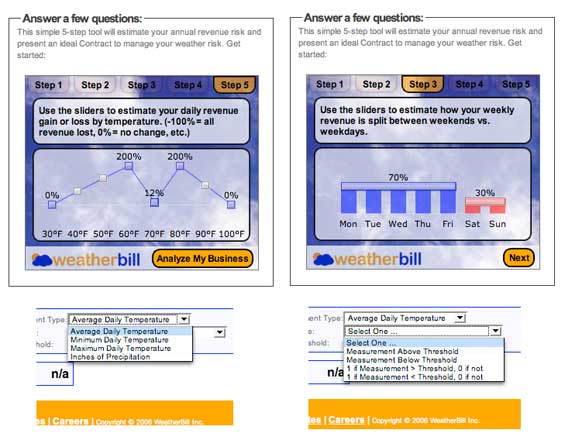