Earlier this year Apple released the iMac Pro, a thoughtfully built machine aimed at creative professionals. The base model starts at $4,999 while a maxed-out configuration will run approximately $13,000. Apple sent us a mid-tier model for review:

As a video producer for TechCrunch, I don’t always have the luxury of two-week deadlines; edits are often banged out right after the shoot. So I’ll be honest — reading off that spec list doesn’t really impress me.

Here’s what I need to know:

In other words, can I justify the price of upgrading? 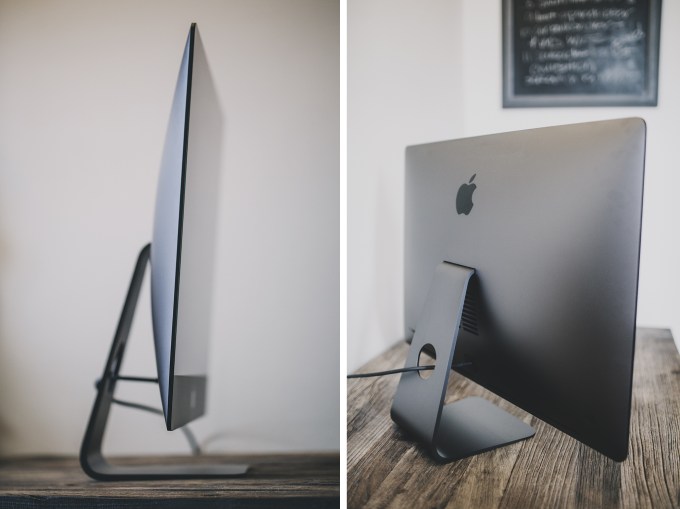 The machine’s design is clean and minimal, as one would expect from Apple — design language hasn’t shifted much from recent iMacs. The space grey though, was a brilliant color choice.

The surface color shifts from warm to cool tones, depending on its surroundings and the quality of light cast in the room. It never looks out of place in my little Brooklyn apartment. 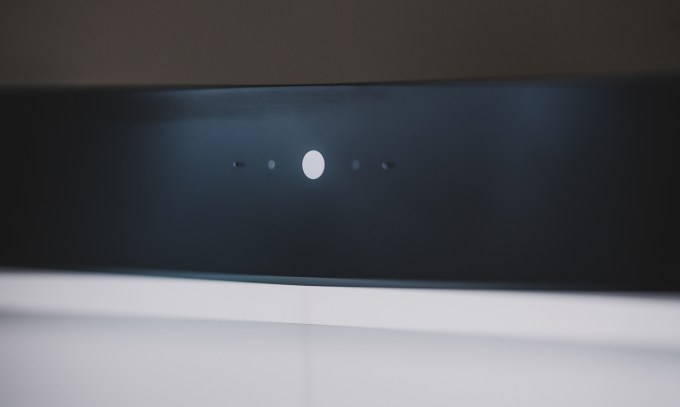 The iMac Pro is the first to have a 1080P FaceTime camera, which means I’ll look great on everyone’s devices, but what I see is dependent on their camera quality. In this case: 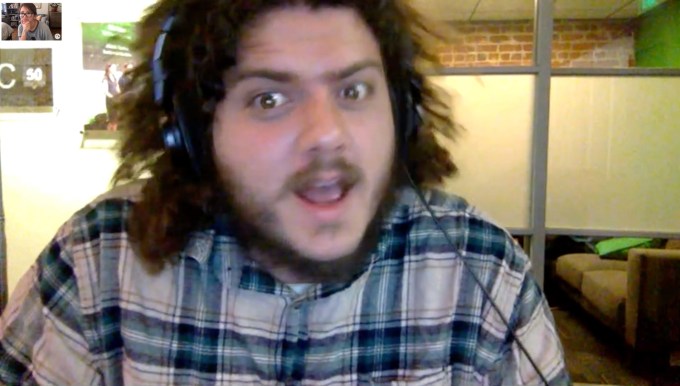 Along with the resolution boost, the webcam also features four microphones at the top of the screen, and surprisingly records decent audio. The combination is a huge plus for video bloggers. 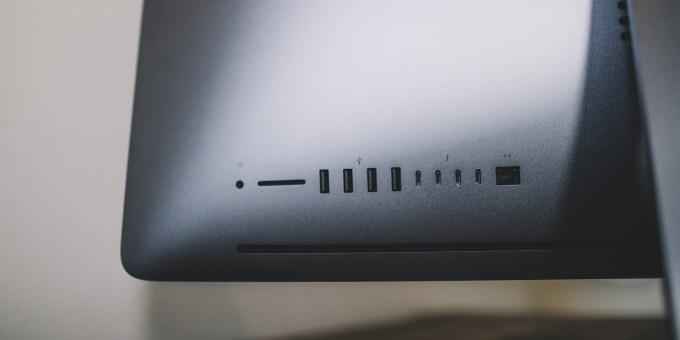 I’ve found use for all four USB 3 ports and the SD card slot makes for easy footage transfer from my Canon Mark IV.

I’ve plugged a G-Raid hard drive into one of the Thunderbolt 3 (USB-C) ports. I can’t, however, find use for the other three since the rest of my USB-C devices have a USB 3 connection on the other end. Maybe a second monitor? I’m going to assume the four ports is Apple’s preparation for when Thunderbolt 3 (USB C) replaces USB 3 as the standard, since they’re all about future-proofing. 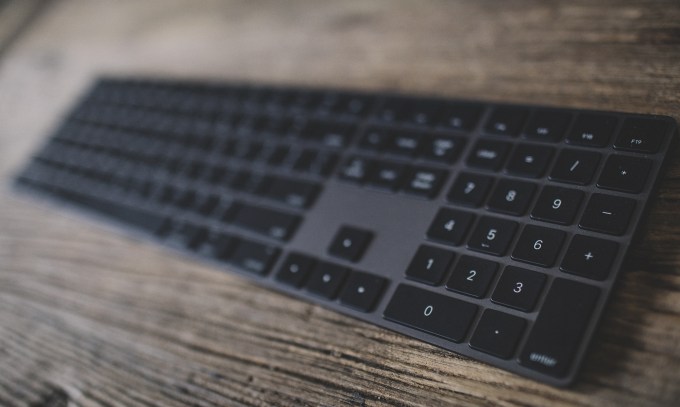 The Magic Keyboard feels like every Apple keyboard from the past few years, except that it’s space grey with black keys. It’s decent, solid. There’s really nothing else to say. 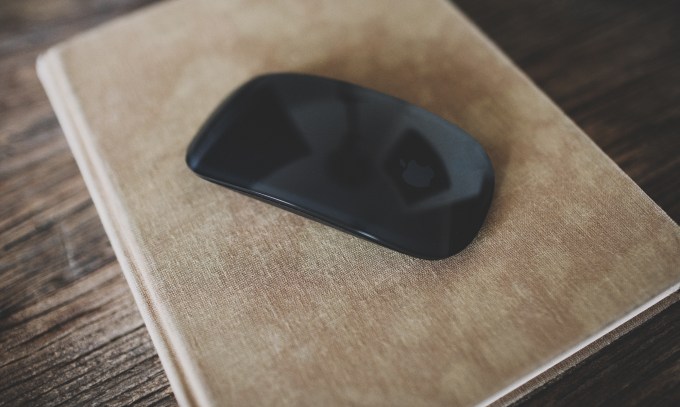 The Magic Mouse 2 handles well on a variety of surfaces, but my desk is made of bumpy reclaimed wood, so I improvised a hardcover of Shel Silverstein’s Where the Sidewalk Ends as a mouse pad.

Switching from a laptop trackpad to the Magic Mouse 2 isn’t a big deal due to the built-in gestures, but depending on your workflow, you might want the $50 upgrade for a Magic Trackpad 2.

The Lightning charging port for the Magic Mouse 2 is at the bottom — you can’t use it while recharging its battery. This is only a slight nuisance because both the keyboard and mouse lasted about two weeks of heavy use before I had to recharge them.

I spent a month with the iMac Pro and edited a total of five videos (the others, on a 2014 mid-tier Macbook Pro for comparison, and because lugging this beast to the coffee shop would’ve looked a bit ridiculous).

Latency is almost non-existent when switching between Adobe Premiere’s ripple, razor and pen tools, while simultaneously exporting a sequence and editing a gallery of CR2 files in Lightroom while jumping from one program to the next to the next.

The loudest I’ve heard the internal fan spin during heavy-duty processing was a faint hum, a stark contrast to the grating, high-pitched growls from my MacBook Pro. 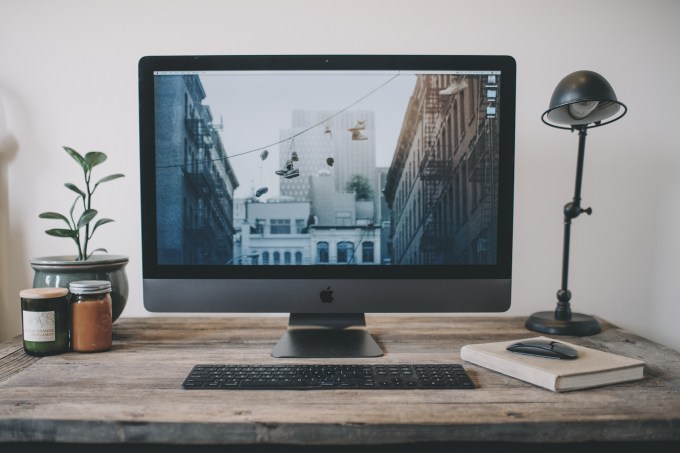 There’s a period of zen we reach as editors when we’re plowing through an edit, when we’re so consumed by whatever project we’re working on that hours will pass before we realize we’ve forgotten to eat, sleep, pee.

I haven’t experienced this for the past year. My geriatric MacBook Pro lags between tasks, which lends opportunity for distractions like a Facebook notification about a random person from high school attending an event nearby or a round of Candy Crush.

With the iMac Pro, I’m reminded of how enjoyable video editing can be.

One minute of 4K footage in 4K sequence, in reverse:

One minute of 4K footage, in 4K sequence, in reverse:

For the most part, render and export times are impressive. There’s no longer a need for 4K proxy workflow.

Performance-wise, I have no major gripes. It’s been ideal for productivity. In fact, the 10-core configuration Apple sent us outstrips my needs for basic 1080P video editing. It’s better suited for heavy-duty motion graphics, 3D modeling, feature-length films shot on 4K, etc. The $5,000 base model would have been more than sufficient and the $13,000 maxed-out configuration would have been overkill.

Is Apple still the choice for creative pros?

I have a handful of video production friends who harp on Apple’s lack of configuration upgradability after the fact. They’re the same friends who prefer PCs or have abandoned Macs for PCs. “I built my own PC with the same specs for one-third the cost.” Personally, the last thing I want to do is open up my desktop, rip out its innards and upgrade components. I’m not a computer enthusiast; I just make videos.

At this price point though, who is the iMac Pro for? I definitely can’t justify its price tag to my corporate overlords. My two friends who run production companies with teams of 14 and 28 echoed the same sentiment: “It doesn’t make sense, business-wise, with that many employees.”

And my freelance colleagues, even the ones consistently landing high-paying gigs, all but one said it wasn’t worth the price, “I’d rather spend the extra few thou on lenses or a new body.”

The lone yes, his reason being, “My iMac is on its last legs, but I’ve had it since 2012. $10,000 for a machine that’ll last five, six years is reasonable.” The others plan to switch over to PCs once their Macs crap out or are waiting for the Mac Pro, set to release in 2019.

Still, I had a month to spend with the Kobe beef of computers, only to revert back to a steamed White Castle patty of a laptop. I’m a little sad to have to send this one back.