While Chicago has long been known as a global center of business, manufacturing, transportation and logistics, food and agriculture, and a living embodiment of American ingenuity and Midwestern work ethic, 2021 became the year the city was finally recognized as a global destination for founders, innovators, and investors.

In 2021, Chicago tech companies raised more than $7.9 billion in growth capital—a figure that puts it just behind the long-standing top-tier tech hubs of San Francisco, New York, Boston, and Los Angeles in terms of venture capital investment. The total was over $1 billion more than Chicago startups raised in all of 2020, representing a stunning funding trajectory.

For the town that already boasts America’s most diversified big city economy, such massive technology growth is a remarkable feat—one fueled by targeted civic efforts, utilization of local resources, investments in diversity and equity, and brilliant local founders.

A stampede of Chicago startup unicorns

Front and center in the Windy City’s distinction against other U.S. tech hubs are the record-breaking 12 unicorns minted in 2021. These billion-dollar valued companies—encompassing everything from logistics to financial management to connecting celebrities with fans—joined the city’s multitude of startups to push Chicago’s fundraising totals to new heights.

The rapid ascension of so many unicorns, thanks to the $2.41 billion of growth capital investment has put Chicago in truly elite company. Out of all-American cities, Chicago only trails San Francisco and New York in terms of producing unicorns, putting it ahead of Boston, Los Angeles, and Seattle. Chicago’s unicorn-minting also outpaced international cities such as London and Berlin.

Inside the Chicago model

As fast as this growth has been, it was not an overnight development, but rather the result of careful planning and investment in technology and innovation. For over a decade, public and private investments have nourished an array of initiatives and incubators that are now thriving. Chicago’s famed 1871 incubator was just recognized as the World’s No. 1 Private Incubator and the Most Promising Incubator for Women Founders.

Other incubator investments have also fueled the city’s success: mHub, a hardtech innovation center, is the nation’s fastest growing hub for manufacturing and physical product development. MATTER, home to more than 200 health care startups, and Portal Innovations, an engine for life science work, are stimulating an already booming health tech sector. While TechNexus, the city’s self-styled venture collaborative, is a global leader in connecting corporations with entrepreneurs. On the horizon is a new $500 million research and innovation institute by Discovery Partners Institute, a new multi-university effort to elevate the city’s global university innovation ecosystem.

These specialized communities of innovation join Chicago Connectory, 2112, and many others in creating a frenzy of tech activity—one that has allowed Chicago to flourish as a home for startup hubs and incubators.

Similarly, integral to the meteoric surge in funding is the city’s history as a major hub of business, infrastructure, transportation, logistics, life sciences, and more. Startups are in a better position to connect with high-level customers in commerce-rich Chicago, which has more Fortune 500 and Fortune 1000 companies than much-hyped tech hubs like Austin or Miami.

The city’s famed reputation as a center of agriculture is taking on a new form, as Chicago stakes its claim as the “Food Innovation Capital of the World.” Food and agriculture companies in Illinois have tripled since 2018, as more ag-tech firms rush to take advantage of a robust talent pool and close proximity to the farmland that makes up 75 percent of the state’s land area.

Chicago’s geostrategic position in the middle of North America also provides it with major advantages: Chicago is the No. 2 data center market in the world and offers exceptional options for regional and global travel. O’Hare Airport, located within city limits, is currently the No. 1 port in the nation and the most internationally connected airport in the United States, and the  third-most internationally connected in the world.

Most notably for founders looking to build an inclusive and diverse tech firm, Chicago is a welcome counter to tech’s homogenous track record by empowering minority and female-led startups with an environment built for their success. 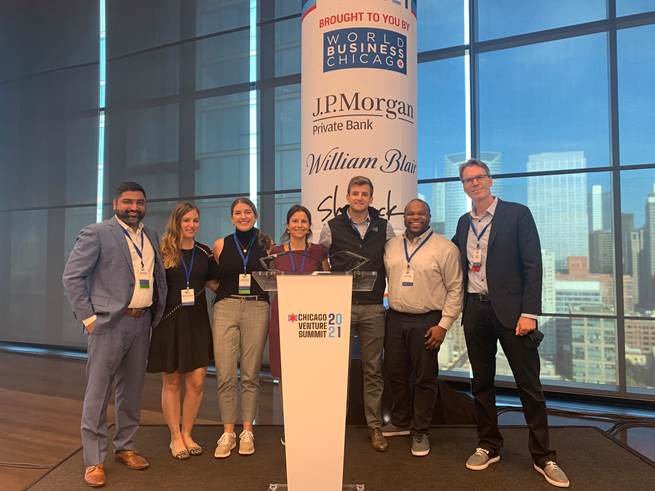 Currently, 30 percent of Chicago-based startups have either a female or person of color as a founder or CEO. In 2021, at least eight Black-led or founded startups raised significant funds in Chicago. This number is expected to grow in the future thanks to investors, incubators and organizations focused on lifting up minority- and women-owned businesses, such as Cleveland Avenue, TechRise, CapitalizeVC, LongJump, Chingona Ventures, Fifth Star Funds, and many others lifting up historically disinvested community groups.

Chicago’s inclusive startup scene is effective at providing female founders and entrepreneurs a potent opportunity to achieve success. Nearly 34 percent of its 3,000 startups are run by women—the largest percentage for any major U.S. city. It’s why Chicago has earned the reputation of being the best big city for female entrepreneurship.

Women founders raised over $257 million in 2021, nearly triple the $80 million raised in 2019. Women-founded startups are also gaining larger investments than in years past: in 2019 the median deal size was $2.5 million and in 2021, it rose dramatically to $8.5 million. The surge in funding totals means that women-founded companies have had the largest proportional share of funding compared to similar companies in other tech ecosystems.

This funding groundswell has also had a profound impact on the city’s Black and Latinx founders. A key leader in the space is the TechRise program by P33 and Verizon. Launched this past April, the $5 million fund drives investment in minority-led startups. Over 100 startups have participated in TechRise’s weekly pitch competitions, and the program has awarded $920,000 to more than 40 startups. According to data from P33, startups that competed in TechRise have collectively gone on to raise $7.2 million in funding and create 420 new jobs. Of the winning teams, 62 percent were founded by women, 76 percent by Black entrepreneurs and 22 percent by Latinos.

City leaders and the tech community at large continue to loudly voice support for investments in a more diverse tech ecosystem.

Much like Chicago’s glittering skyline that reaches new heights each decade, the city’s tech scene continues to break the mold and generate new potential for entrepreneurs.

In the city’s creative and dynamic tech scene, emerging verticals continue to bring new opportunities to the forefront. Supply chain tech is one such industry that has seen a remarkable 559 percent growth in investment since 2019. Similarly, fast-growing verticals in Chicago include marketing tech, cloudtech, and transportation and logistics operations. With deep, diverse talent pools in nearly every work sector, Chicago has continually met the needs of startups across all verticals.

Chicago’s incredible gains in unicorns and funding this year are a harbinger of growth to come. This bright future was clear when the next generation of founders met with key investors at World Business Chicago’s 2021 Chicago Venture Summit. The three-day September event was a sellout, welcoming more than 600 participants, including entrepreneurs, venture capital investors, and other tech luminaries all focused on creating the next generation of the city’s unicorns.

Innovative minds from across the globe are now seeking out Chicago as it joins the ranks of other elite tech hubs, while offering substantially more affordable housing and other quality-of-life benefits.  The continued investments in the city’s tech and related industries shows there will only be more growth and opportunity in the future. And in Chicago, with its strategic focus on equity and inclusivity, that includes access to capital and opportunity, where everyone participates in the city’s tech success.