An app user’s lifecycle isn’t a linear journey. Unlike on web, where the aim is often to push consumers down the funnel to conversion, apps rely on continued engagement. After all, keeping users engaged is a good benchmark for understanding app performance, and also results in higher revenue.

So far, the industry has understandably focused on the very start of the user lifecycle – how to attract users, and how to convince them to download an app. There’s been much less focus on the stages further down the line, like churn and uninstall. But these steps are an unavoidable part of the equation, and there will always be a proportion of users who leave an app.

Most users churn, but how many return?

At Adjust, we wanted to dig deeper into the tail end of the user journey – to see the rates at which people disengage, and to gain insight into improving their overall experience.

To do so, we analyzed installs from a year period, across different verticals, user acquisition types, and platforms. We found that almost 80% of users churn the day after installing, meaning app marketers have an incredibly short window to capture their attention.

But the good news is that these users aren’t lost forever. We then looked into the average rate at which churned users will come back – defined as returning after a gap of two or more months without registering a session. An estimated 17% return to an app after a two-month break, and after three months, that number still stands at 11%. 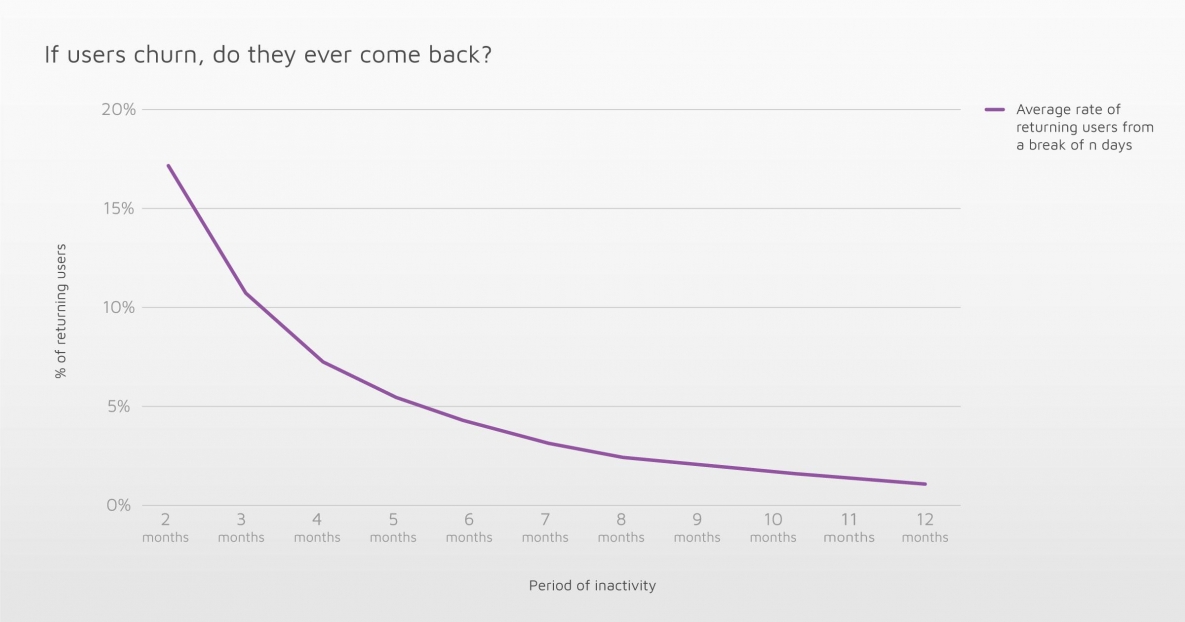 That’s encouraging, but also means that you need to make sure you’re counting these users as returning ones, rather than completely fresh. For example, sessions instigated by users who had already downloaded the app and were now coming back after say, three months, would actually be counted as a new install – so we realized pretty fast the importance of working with unlimited look-back windows. Not doing so would skew our clients’ datasets, and they’d also be paying for the misattribution if returning users were associated with paid marketing campaigns.

But knowing how many users is half the battle. We also wanted to look at those who took the next step and uninstalled the app completely. We found users tend to keep an app for just under six days before losing interest – prompting their last session – and uninstalling it.

Why do users uninstall an app in the first place?

Well, there’s a whole host of reasons why. Sometimes, it’s as simple as users not having enough storage on their phone, and having to rotate the apps they keep downloaded. Bugs, poor user experience, an un-engaging app or one that doesn’t serve its seemingly intended purpose are other obvious reasons why users would uninstall.

Vertical-specific data can also help us dig deeper into the reasons why, and it turns out there’s a big difference between them. 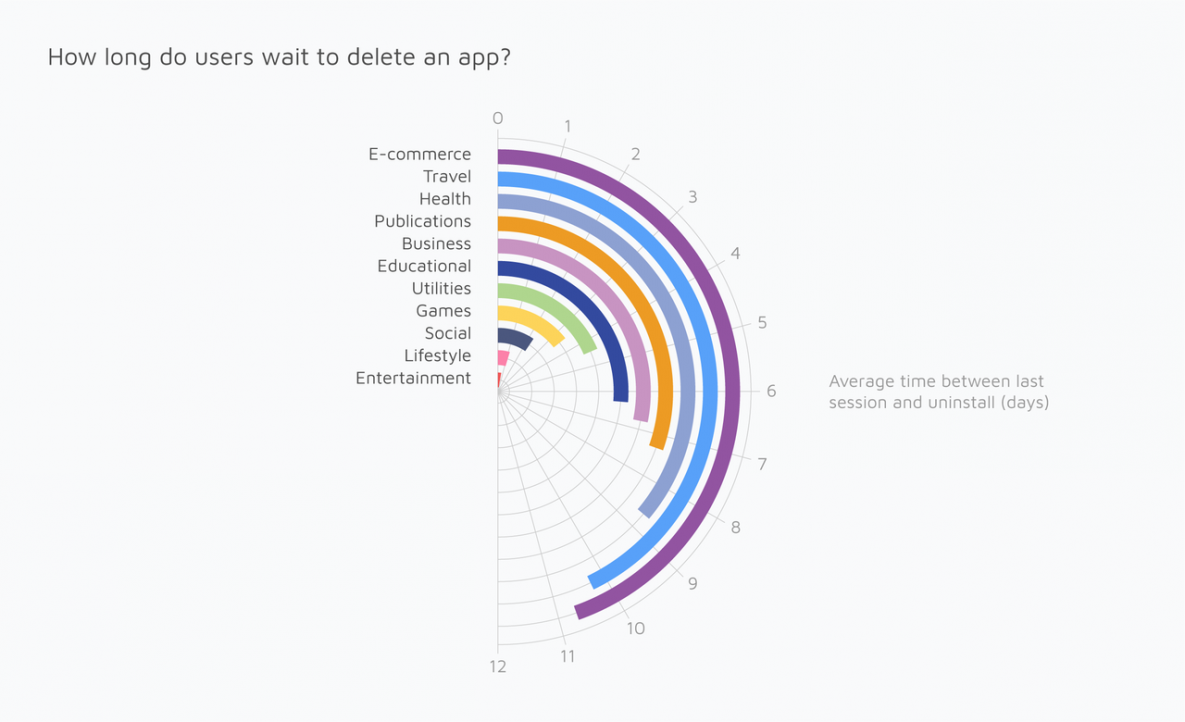 At one end of the spectrum, Entertainment and Lifestyle apps are quickly discarded – the average user sticks around for between 12 and 25 hours between their last session and uninstalling. These very low rates could represent a knee-jerk reaction from consumers, who may be so dissatisfied with the app and its user experience that they haven’t just closed it – they’ve actually deleted it pretty much straight away.

On the other end, E-commerce apps have a lifespan of about 11 days from a user’s last session. One explanation behind this activity might be due to user habits: if someone’s made a purchase, they’re unlikely to delete the app straight after, and risk missing out on post-purchase communication.

Why does uninstall and reinstall data matter?

For marketers who want to avoid this cycle of uninstall and reinstalls, it’s essential you know when users tend to drop off. Combining time and event data will help you locate exactly where the pain points are and help troubleshoot any particular bugs.

And once you know when users drop off, it also gives you much more granular detail into the user journey – such as working out the quality of users from different sources, optimizing user reach, and fine-tuning marketing messages.

Ultimately, being able to track these extra KPIs sheds light on the final stages of the user journey black box. And knowing when your users leave means you’re then better placed to make the right decisions about optimizations, marketing, and creating a better customer journey.

If you’d like to find out more about the user lifecycle, and for additional breakdowns by vertical, user acquisition types and platforms, download the full ebook here.