The Fourth Industrial Revolution is not the future. It’s already the reality that we live in. Countries around the world are already taking steps and adapting to this new paradigm. Artificial intelligence, blockchain, vehicle automation, smart factories and many more advancements are ushering in this new era in which innovation is key.

Companies and entrepreneurs dreaming of success in times like this should keep their eyes on the horizon and actively seek out the best environment to cultivate innovation in their business. Innovative countries, like South Korea, should be at the top of your list. In 2017, Korea’s central government initiated a progressive, hands-on approach to the economy with a strong focus on new policies to kickstart support for and development of new and innovative technologies. According to the 2018 Bloomberg Innovation Index, Korea was number 1 for receiving the most US patents and ranked number 2 in the world for both R&D investment and manufacturing. With such a high level of support and moment for developing new industry, Korea is undoubtedly the best place for startups to rev up and begin their journey.

The Korean government invests in startups from all over the world through a competitive accelerator program held once per year in Seoul called the K-Startup Grand Challenge. In 2017, over 1,500 companies from 118 countries competed to participate in the Challenge.

The K-Startup Grand Challenge will be held again this year. After passing a regional audition and document screening, 80 teams will be invited to work at the Pangyo Startup Campus. Participants will benefit from a large system of support such as the campus infrastructure, mentoring, connections to the local companies, and even support for settlement in the country. Also the National IT Industry Promotion Agency(NIPA), the Korean government organization that hosts the Challenge, has been designated as the “Global center for Startup and Immigration (26, June 2017)”. Through their Startup Immigration Support System, startups and entrepreneurs who come to South Korea will be eligible for ‘Fast Track’ visas.

The K-Startup Grand Challenge will host a final demo day in early December. Startups will present the progress they have made with their business since joining the Challenge. The top 40 teams will receive funding for an additional 6 months to stay in Korea and officially launch their business. The size of grants provided in the K-Startup Grand Challenge has doubled since previous years and there will be more opportunities for global startups than ever before.

From the previous two events, K-Startup Grand Challenge has proven its influence on developing entrepreneurs and startups who participated on our competition by showing detailed results. Entrepreneurs and startups were able to receive funding of over $26 million in total. They excelled in fulfillments as well, successfully closing 46 contracts along with accomplishment of over 300 partnerships and MOU. The participants were also supported by providing over 80 cases of co-working opportunity with number of Korea’s major companies such as SAMSUNG and LG. 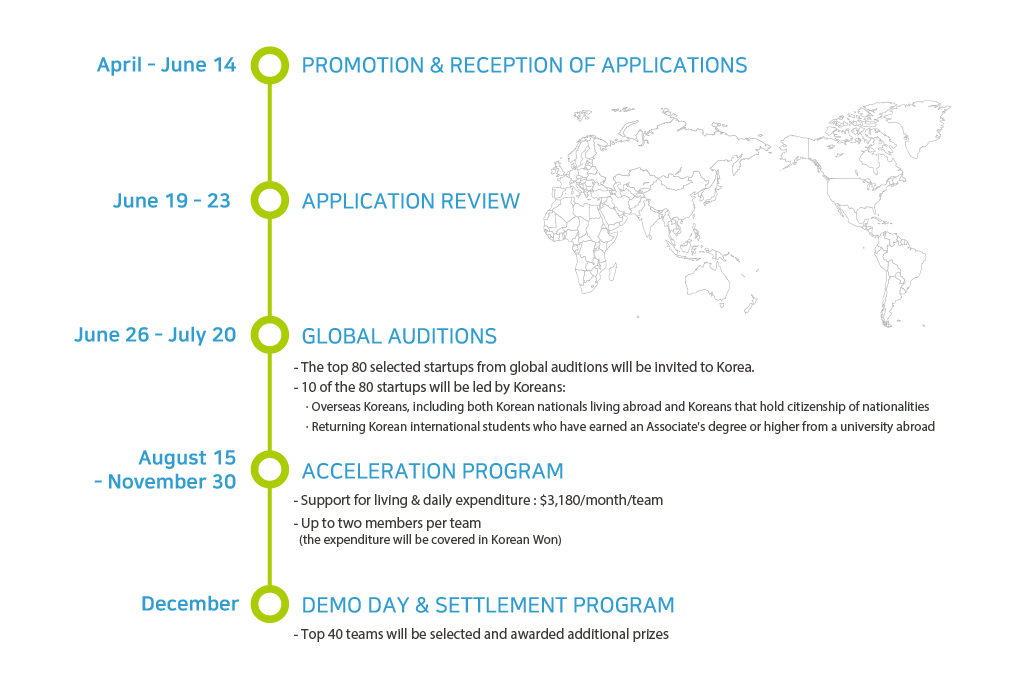 Applications for the 2018 K-Startup Grand Challenge can be submitted from April to June 14th through the Challenge’s official website (https://www.k-startupgc.org). 80 teams will be selected through an audition process at the end of July. These teams will then be invited to Korea to participate in the 3½ month-long accelerator program. Of these 80, the top 40 teams will be chosen for additional support and funding in early December at the final demo day.

If you and your startup are interested in participating in the 2018 K-Startup Grand Challenge, visit the official Facebook Page (https://www.facebook.com/kstartupgc) for information, updates, and inquiries.