Invigorated by recent developments, venture capitalists (VC) are raising larger rounds of funding in the climate tech sector. With high demand for investment and innovation, climate tech-focused funds are estimated to hit a record $21 billion in capital raised during 2021. Similarly, VC investment in climate tech companies is expected to reach $49 billion by the end of the year.

The industrial revolution powered by fossil fuels has impacted the planet raising global temperatures by an estimated 1.5% over pre-industrial levels. In 2020, there were a record number of climate disasters each resulting in excess of over $1 billion in damages. By 2050, it is estimated that damages from the global climate crisis could surpass $77 trillion.

As the crisis intensifies, popular sentiment has pressured governments and corporations across the globe to commit to a long-term goal of achieving net zero greenhouse gas emissions. 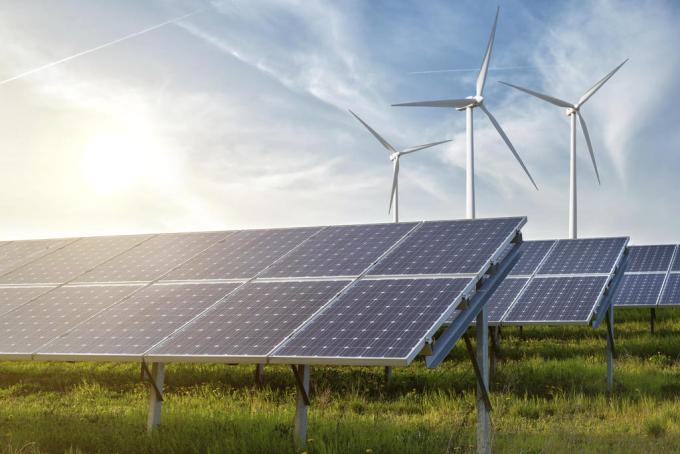 SVB’s Future of Climate Tech looks back at the lessons learnt by investors from the first cleantech boom in 2006 and its subsequent bust five years later. During this period, investors deployed $25 billion primarily into thin-film solar, biofuels and energy storage companies. At the time, oil and gas production was cheap, public interest in climate change remained low and governments were slow to enact climate impact legislation. There were few winners from this period with 90% of companies funded after 2007 returning less capital than invested, however critical infrastructure was established and business models were explored providing a fertile ground for future entrepreneurs to enter the cleantech ecosystem.

Over the last decade, much has changed in both perception and policy. Evolving public sentiment put pressure on governments to enact environmentally friendly policies, tax bad actors and build alternative energy infrastructure. Climate tech companies developed business models that can more readily adapt to change. Investment continued to flow into renewable and sustainable forms of energy, reducing the costs for wind and solar as well as improving their cost-competitiveness to fossil fuels.

New pools of capital are also emerging such as special purpose acquisition companies (SPACs) which allow climate tech companies to focus on technological development and commercialization, rather than fundraising. It’s predicted that $37 billion will flow to US, VC-backed climate tech companies through the de-SPAC process in addition to $30 billion from the accompanying private and public equity (PIPE) transactions.

This convergence of climate-aware factors has created opportunities for investors to capitalize on emerging trends and enter the market by investing in this sustainable, yet profitable space. 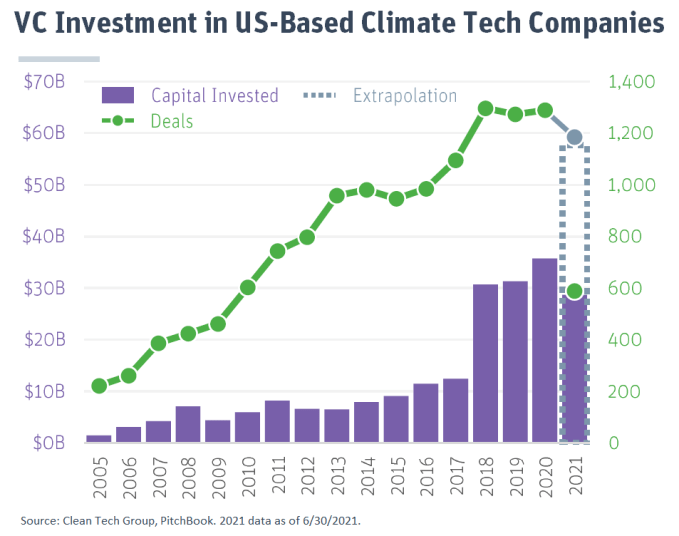 To hit global emission targets, societies have come to rely on climate tech companies to design innovative solutions that will change the way consumers, governments, businesses and industries operate. In this sector, investors are finding opportunities in companies that are stimulating this change with efficient, emission-reducing technological and supply chain innovations that have the potential to disrupt industries that are traditionally climate unfriendly.

Current trends highlighted by SVB’s Future of Climate Tech suggest that VC investment shows a greater propensity to flow into three sectors during 2021: transportation and logistics, agriculture and food as well as energy and power.

Driving towards an Electric Standard

Extensive media coverage has put electric vehicles (EV) in the spotlight during the current climate tech revolution. With increasing valuations and large funding rounds, capital investment in the transportation and logistics sector is expected to hit $19.5 billion in 2021.

The success of companies like Tesla has proven that EVs are on the cusp of wider adoption, but the market has two major hurdles to overcome. EVs remain a luxury purchase hampered by consumer perceptions over driving range and limited access to overnight rapid charging. For EVs to become the family automobile of choice, an open and robust cross-country charging infrastructure will need to be established, EVs need to become more affordable and the average American’s predilections – long wedded to the internal combustion engine – need to change.

Tesla as well as companies like ChargePoint are addressing driving range issues by investing in rapid charging stations infrastructure, while the entry of more established automakers into the EV market is expected to lower the price of vehicles as competition takes hold and production volumes ramp up. However, increased government subsidies may be required to widen the availability of EVs to more customers to accelerate the switch over to a fully electric national standard.

Other subsectors attracting investor interest are autonomous driving and fleet management software. While these technologies don’t directly improve the climate, they enable electrification of shipping/logistics and increased fuel efficiency for gas-powered fleets.

To meet the dietary needs of a growing population, the food and agriculture industry is adopting new production and distribution technologies.  Sustainable agriculture businesses have spurred investor appetite, attracting larger rounds of financing – growing capital investment to a projected $9.4 billion in 2021.

The success of Beyond Meat and Impossible Foods shows that there is consumer demand for plant-based meat alternatives while also lessening the reliance on livestock which has several negative climate impacts including harmful emissions, detrimental water practices and disruptive land management.

At the other end of the spectrum, seed stage rounds of investment are being raised for climate tech companies that are focusing on bringing greater efficiency to traditional methods of farming such as epigenetics to improve crop yields or autonomous aircraft for precision fertilizer application.

Although alternative proteins are expected to capture the majority of investment, other promising sustainable agriculture solutions such as vertical farming and urban agriculture are also being targeted.

Since power generation accounts for 73% of global emissions, decarbonizing the power grid and moving to sustainable electrification is a fast-track path to significantly reduce emissions. Though the complexities of the utility market and long investment cycles in this highly regulated space has been challenging for traditional VC firms, the energy and power sector has seen substantial capital investment in climate impact technology that is expected to reach $8.6 billion in 2021.

Investment in the energy storage subsector is expected to reach $1.9 billion this year primarily driven by investment in solutions such as long-duration energy storage and battery chemistries. Investment is also flowing into energy efficiency companies and smart grid technologies that enable two-way communication down to the individual appliance level.

As the grid continues to integrate more renewable energy sources and electrification in transportation, energy and the home expands, investment will be required to upgrade aging infrastructure.

Investing in a sustainable tomorrow

The innovation economy is responding to the climate crisis with paradigm shifting solutions and technologies. These technologies and innovations will not only reduce human impacts on the climate but also have the potential to significantly improve our economies, livelihoods and quality of life. As growth and innovation in the climate tech sector accelerates, expect to see new and exciting opportunities emerge that will continue to attract interests from both investors and entrepreneurs.

To learn more about the future of climate tech, read the full report.