In addition to their quarterly reports on space startup and investment trends, Space Capital has now made their underlying dataset available in an interactive format. Now, interested parties can drill into each of the defined technology stacks, double-click on certain annual data, or zoom into specific country trends.

Space Capital launched the Space Investment Quarterly in 2017 with the aim of uncovering insights about investing in the space economy. While several other organizations report publicly available data, Space Capital’s data is unique in that it also includes anonymized and aggregated info from the firm’s own due diligence processes; it is also free. As such, their quarterly publication has become the source of record for space startup and investment trends, featured frequently by TechCrunch and also cited on multiple occasions by the U.S. Secretary of Commerce and by the Vice President of the United States.

The fund’s thesis emphasizes that space-based technologies are the building blocks of innovation and impact nearly every major industry. As the greatest space technology success story to-date, GPS has generated trillions of dollars in economic value and some of the largest venture outcomes in history. Moreover, the history of GPS provides a framework for understanding how space-based technology has become a platform for innovation on a global scale. Specifically, the development of technology layers on top of space-based infrastructure and the distribution of data for mass adoption, which unlocks thousands of unique applications. 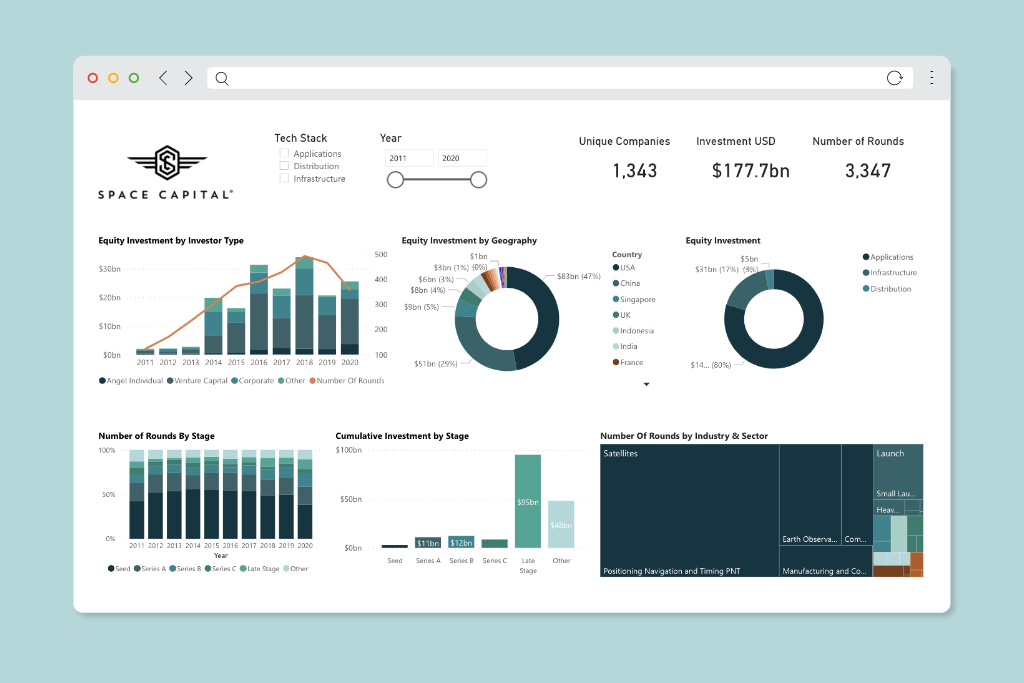 As outlined in The GPS Playbook, published together with Silicon Valley Bank, Space Capital believes that GPS provides a playbook for how space-based technologies will create new investment opportunities and that Geospatial Intelligence and satellite Communications have similar growth potential to GPS. Space Capital is investing to unlock that value.

The framework for the Space Investment Quarterly is based upon insights from The GPS Playbook. Beginning in Q1 2020, the report was expanded beyond just rockets and satellites, incorporating companies that are building upon space-based Infrastructure, creating new technology layers that provide access through Distribution and unlocking specialized Applications. For the first time, their report provided a holistic picture of capital flows into the space economy. For too long space Infrastructure has been designed and built in a vacuum, absent of market forces. The future is an open architecture, guided by market demand, to build assets that help us respond to our most pressing global challenges.

The most recent Q4 2020 Space Investment Quarterly showed that over the last 10 years there has been $177.7B of equity investment across 1,343 unique companies in the space economy, led by investment in the U.S. and China, which collectively account for 75% of the global total. Investors deployed another $5.7B in Q4, bringing the 2020 total to $25.6B. Importantly, their data shows that the space economy has remained remarkably strong despite the pandemic. 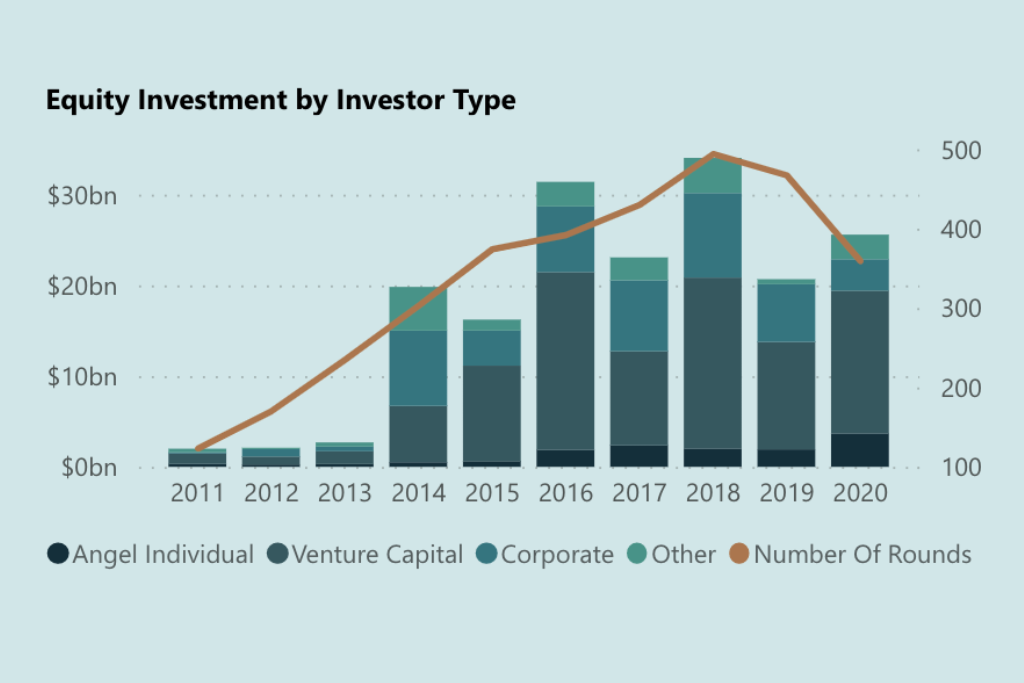 As the world entered its first waves of COVID-19 lockdowns in Q1-Q2 2020, many industry commentators predicted a wave of bankruptcies and a general pullback by investors, which never materialized. In fact, as the world shifted to remote operations, Geospatial Intelligence companies experienced “thousands of percent jumps” in the use of its satellite imagery data during the pandemic, as told by Maxar’s ($MAXR) CEO in August 2020. By mid-Q2, venture activity had warmed and Q3 dealmaking had returned. VCs invested another $15.7B into 252 space companies in 2020, of which $9.4B went to U.S. companies, representing 6% of the $156.2B in total venture dollars invested during the year. And despite expectations that Infrastructure would be hardest hit by the pandemic, 2020 turned out to be a record year for investment at this layer of the stack.

Investors liquidated $37.5 billion of value from 43 company exits in 2020, accounting for 16% of the total value liquidated in the space economy over the last 10 years. A significant number of tech companies rushed to the public markets last year and to kick off 2021, ARK Invest announced the launch of a new Space ETF ($ARKX), which sent a whole group of stocks rocketing higher. While there are only a handful of publicly traded space stocks to choose from today, there are already several more slated to go public in H1 2021 via SPAC, and Space Capital expects that there will be at least a few more publicly listed space companies to add to the ETF in 2021.

One of the more overlooked stories of 2020, which is likely to have a significant impact in 2021, and beyond, is Amazon’s and Microsoft’s accelerating space ambitions. In Q4, Microsoft announced that its Azure cloud network will connect to SpaceX’s Starlink satellite internet, competing with Amazon’s AWS Ground Station and its Project Kuiper. Working with a number of Space Capital portfolio companies, Azure Space and AWS Space are removing complexity across the value chain, making a global network of space-based communication and data collection infrastructure accessible to the tech community to innovate upon, a repeat of The GPS Playbook. The increased involvement of these tech giants will serve as yet another catalyst for growth in this sector. In the same way that every company today is a technology company, the companies of tomorrow will all be space companies.

Now, for the first time, ten years of the most comprehensive market intelligence on space startup and investment trends is available in an interactive format. Explore the dataset now and discover which geographies, technology stacks, and companies are driving the space economy forward.