To date, 2021 has been a record year for deals in the technology sector. With so many business’ employees operating remotely due to the ongoing global pandemic, tech has taken a front and center role in enabling remote working environments. People and businesses are appreciating, now more than ever, how technological innovation can not only increase productivity but also lessen the impact of widespread disruptions such as this pandemic. The market is reflecting that confidence in technological solutions. Investors are seeing technology as a major growth segment of the economy, and companies are looking to position themselves to be part of that expansion in smart, strategic ways that make sense for their business.

The technology sector impacts many industries, including energy, healthcare, finance and automotive, all of which are faced with disruptions to their traditional business models fueled by new tech innovations, along with shifting regulatory demands. To stay competitive, companies in those industries, among others, have had to either develop new technology or acquire it. Market forces in the last 18 months are encouraging many companies to be acquirors.

Valuations are at historic highs while interest rates continue to remain low. As such, we are in a competitive, seller-friendly market, which is expected to continue. The speed and complexity of mergers and acquisition transactions in this market environment make it crucial to have a smart, experienced team handling the deal, from structuring through signing to a successful closing. 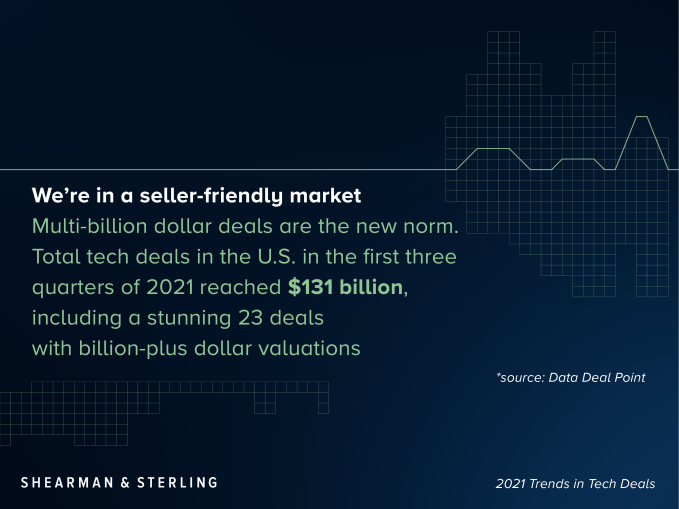 Technology companies and their equity-holders have a lot of options right now:

SPACs have been a hot trend on Wall Street throughout 2020 and 2021. A SPAC is a publicly-listed shell company with no commercial operations that raises capital through an IPO for the purpose of merging with a privately-held company in what is called a de-SPAC transaction. A de-SPAC transaction enables the private company to become a public company without going through the traditional IPO process. Venture capitalists and private equity sponsors utilize SPACs because they can provide cheaper financing and a quicker return on their investment than with a traditional fundraising and exit cycle. While SPACs face certain headwinds, including a renewed focus from regulators and more discerning investors, the number of SPACs actively looking for de-SPAC targets continues to provide a robust number of options for tech companies interested in pursuing this path.

On the M&A front, we are seeing near greater market adoption of representation and warranty insurance in transactions. Representation and warranty insurance enables sellers to get more of their consideration in an acquisition at closing and the cost of insurance remains reasonable. This type of insurance has been a standard feature of private equity transactions for several years, and we are now seeing it gain increasing acceptance by strategic buyers. There is also a trend in M&A towards less financing contingencies.

As part of the “new normal” resulting from the ongoing pandemic, M&A deals now universally contain some sort of relief in regard to uncertainty in the market surrounding COVID, and, more broadly, any government mandates that may impact business. We’re seeing this both in terms of exceptions to “material adverse effect” definitions and as exceptions to covenants requiring the target company to operate its business in the ordinary course between signing and closing. 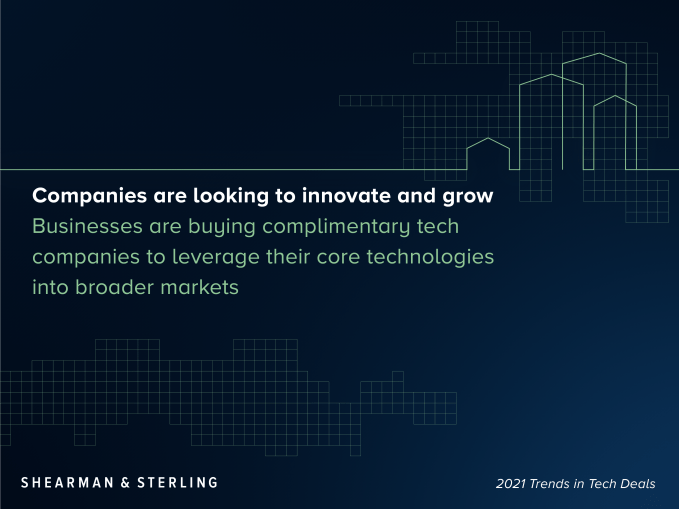 While the difference between organic and inorganic growth used to be crucial, these days growth is being valued for its own sake. As non-tech businesses rely more on technology for innovation and growth, they have the choice of either developing their own technology or buying companies that have already developed the technology needed for their businesses.

The automotive and energy industries, for example, are looking to the tech world to help them keep up with shifting demands around emissions. Power grids have become “smart,” and autonomous vehicles are the future of automotive. There is incredible disruption by FinTech firms for traditional businesses dealing in, for example, insurance and mortgages, as well as payments technology across all industries. The proliferation of cryptocurrency and peer-to-peer lending have the potential to be major disruptors for traditional banks.

As companies identify these areas of disruption and growth in their sectors, they are often deciding the best course of action is to acquire an innovative tech company to stay competitive. 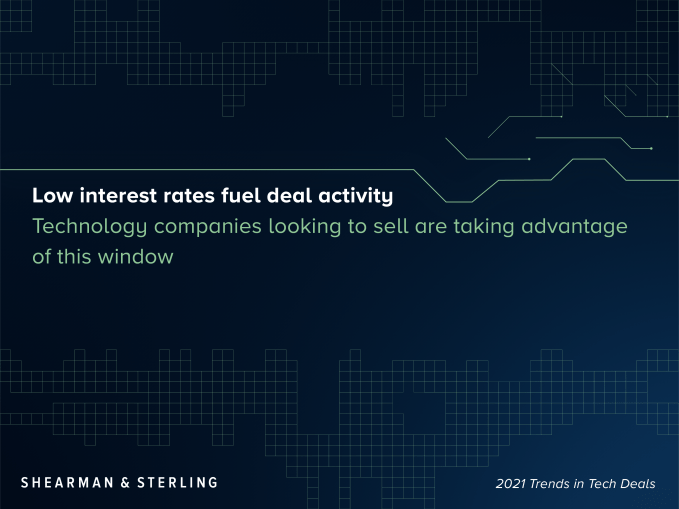 Strategic growth is just one factor in the high deal volume that we’re seeing in the technology sector. In the market more broadly, we’re seeing high cash-flow and low interest rates, which makes the cost of doing a deal much lower, making it more attractive.

The Federal Reserve set its benchmark interest rate close to zero at the start of the pandemic, and has recommitted to holding it there – although that won’t last forever. Companies across all sectors are taking advantage of the low interest rates while they last, and technology firms are seeing a lot of that benefit. 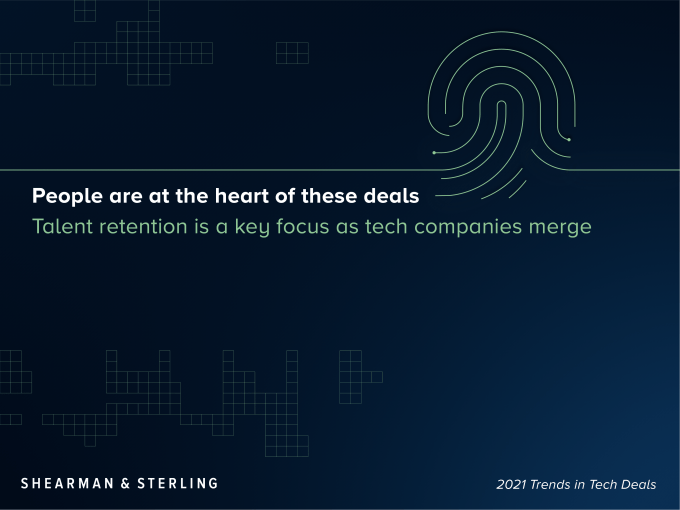 With the market so conducive to mergers and acquisitions in the technology sector, talent retention continues to be critical to the success of a transaction. Historically high valuations mean that many visionary tech entrepreneurs and their executive teams are being offered a life-changing amount of money as their company receives an acquisition offer. So, the buyer needs to ensure that the deal includes incentives for their most talented engineers, designers and other key personnel to stay onboard to ensure long-term success. These incentives and other tools are often complicated by tax and accounting issues – not to mention emotions (for example, employees can feel left out if they are not found to be “key employees,” even if the impact of being a “key employee” is to become subject to additional restrictions). It’s crucial to have an experienced team taking these issues into consideration as they structure the deal. 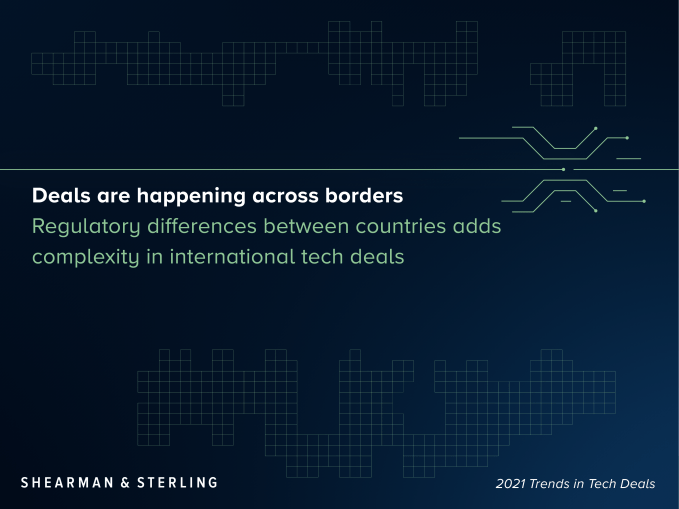 Development for technology companies is increasingly global. Many tech deals in the last year and a half have involved multiple locations. Particularly hot areas of development include India, Eastern Europe, Israel and South America. Many large cap U.S. tech companies are holding significant amounts of cash offshore that would be subject to U.S. tax if it were repatriated to the U.S. As such, they are often looking to put that cash to work by acquiring offshore businesses.  We’re also seeing a lot of foreign buyers interested in U.S. assets, although a more assertive CFIUS (Committee on Foreign Investment in the United States, which must approve the acquisition of certain U.S. businesses by foreign buyers), which has not changed with the new administration, has put a damper on inbound deal activity for buyers from certain countries, particularly China. 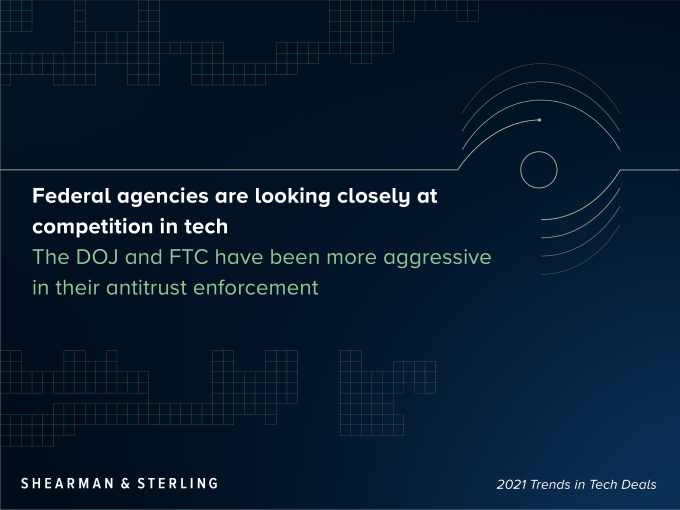 With all this activity happening in the technology sector, it’s natural that The Department of Justice and the Federal Trade Commission are closely scrutinizing these deals. Following the change of guard in the White House in January, the administration of President Joe Biden announced they would “vigorously” monitor mergers and acquisitions, with the goal of protecting consumers against potential monopolies. The U.K. has also become more active in scrutinizing M&A transactions, and there has been an uptick in coordination between regulatory agencies in the U.S., U.K. and Europe.

Some states are taking similar action, such as New York, which recently passed a bill that, if approved by the governor, would effectively give support to plaintiffs looking to block or break up mergers.

While companies evaluating the various market factors are often deciding to acquire a technology company to fill strategic needs, pushback from regulators is hampering some deals. Visa agreed to pay $5.3 billion to acquire the FinTech startup Plaid, but the deal was called off following antitrust concerns from the DOJ.

For tech companies looking to make a deal, it’s crucial to be aware of this policy landscape and the heightened scrutiny targeting tech companies specifically. A company’s legal team needs to have a robust understanding of regulators’ strengthening muscles, so they can proactively structure deals that hold up against scrutiny. 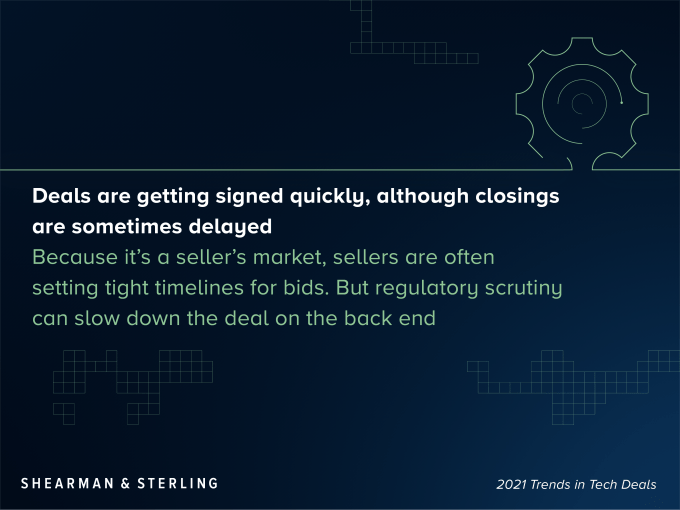 Deals are moving quickly to signing, but closing is sometimes delayed by regulatory probes. With such a high volume of deal activity, federal enforcement agencies are being upfront about their limited ability to keep up with their work of overseeing these deals. Federal regulators require oversight of any deals over a certain threshold, which is currently set at $91 million. The FTC recently posted notice that, even if they don’t respond within the standard 30-day window to companies planning a deal, with what’s known as a “second request,” that doesn’t mean they’re giving a bright green light to go ahead.

The FTC makes it clear that, “Companies that choose to proceed with transactions that have not been fully investigated are doing so at their own risk.” Meaning, it’s more crucial than ever for a company’s legal team to precisely and accurately assess the likelihood of an antitrust probe of their deal, and build a plan that satisfies regulators while supporting the tech company’s plans for expansion and growth.

Shearman & Sterling is a market leader in technology transactions. Learn more on our website.