Monetary systems run by people tend to act like people. Subject to emotions and political pressures, their rules change whenever their rulers want them to change. Bitcoin is different. It more closely resembles the laws of physics than it does the fiats of governments. Transactions using Bitcoin cannot be subverted or changed haphazardly. The rules of the road are upfront and clear: every transaction requires consensus, and the rewards for those facilitating the transactions are hard-coded. In many ways, inflexibility is Bitcoin’s superpower.

Facilitating widespread access to Bitcoin, therefore, is a massive challenge — but an equal opportunity for positive change. Universal adoption of Bitcoin could transform the lives of billions of people around the world. It could make for fairer, more equitable global financial systems. It could quite literally lift people from poverty.

That’s why companies like NYDIG are working to make Bitcoin a usable resource for everyday people in everyday life. (And so far, it’s working.) Here are three things to know before Bitcoin becomes a part of your banking, credit card, and even paycheck world.

1. Bitcoin has fundamentally secure characteristics: Guessing a Bitcoin key would be like plucking a single atom out of the entire universe. Bitcoin is secure in ways the mind can hardly fathom. But fathom this: a Bitcoin key, or the private value associated with your supply of Bitcoin, is just one of 2^256 possible combinations. That’s a lot. That’s a lot more than a lot.

Or as Brian Langel, the Chief Technology Officer at NYDIG bluntly points out, “The number of atoms in the perceivable universe is likely smaller than that number.”

Furthermore, when your Bitcoin key is used in a transaction, the inherent anonymity of the key is further obscured through a process of cryptography. (This is where “crypto” comes from.) Cryptography is not new at all; it has been around for decades. It’s the coding system that underpins a myriad of other secure networks — everything from diplomatic cables sent by intelligence services to VPN addresses used by remote employees. Even when you move money between accounts on your online banking app, the information you share is made secure with methods of cryptography.

Ultimately what makes Bitcoin so secure is (1) the sheer impossibility of guessing a Bitcoin key, (2) the sophisticated cryptography of the blockchain, and (3) the decentralized nature of validation. 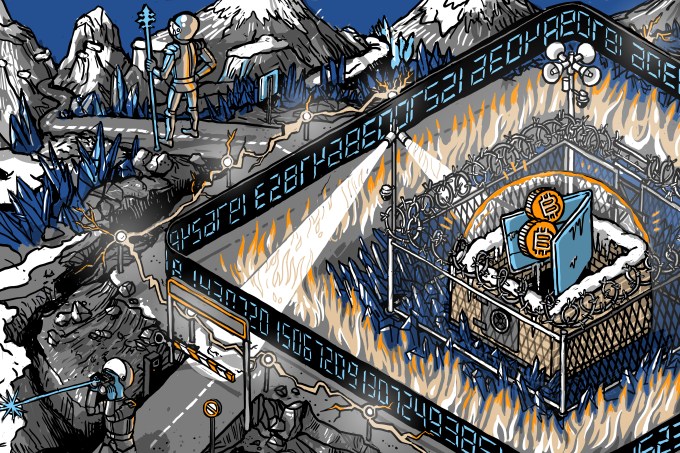 Although the properties of Bitcoin make for unprecedentedly secure transactions, there is one catch: you have to know that random number. What happens if you don’t store it correctly?

Hot wallets are ways to store your private key on a routable network like the Internet. “It’s inherently less secure because there are more ways to attack,” says Langel, “but there are perceived tradeoffs. With a hot wallet, you can quickly and programmatically interact with your key. If you wanted to move funds quickly, you could.”

Cold storage, on the other hand, reduces the risk of hacking by simply removing the key from the online realm and placing it into a physical Fort Knox-esque vault. Cold storage might seem like it slows down accessibility, but that’s not always the case.

Explaining NYDIG’s cold storage system, Langel says, “We start with an online system that verifies intention and integrity. And then we take that instruction and literally print it out. That information then interacts with various physical controls inside a secure storage facility. Inside, we utilize access controls, separation of duties, multiple actors, and hardware security modules that were built for storing cryptographic material prior to cryptocurrency even existing.”

On top of the un-guessability of a Bitcoin key and its cryptographic controls online, cold storage provides a tried-and-true method for security. “If you look at the arc of human existence, we’ve been refining physical controls for a long time,” says Langel. “There’s a lot of history there.”

3. Technologies like the Lightning Network make it possible to pay for coffee using Bitcoin. If the monetary system of Bitcoin is so (purposefully) friction-filled, then how could it ever replace a debit card?

At its core, Bitcoin does not offer a breezy mode for paying for things. Rather, it’s the so-called Layer 2 Technologies sitting across Bitcoin’s sturdy foundation that bring the power and fairness of Bitcoin to everyday life. The most widely used Layer 2 Technology is called The Lightning Network, and it’s what makes Bitcoin into an actual medium of exchange.

You can think of Layer 2 Technologies like the protocols that run atop the Internet. Opening Gmail, for example, engages multiple fast-moving protocols on top of the base network; these are protocols like IP, HTTP, or even the Gmail app. Without them, it might take a very long time to get to your email.

In terms of Bitcoin, the Lightning Network speeds up the process of a transaction by allowing a transaction to take place atop the network before anything is recorded on the Blockchain. They’re then recorded in bulk. “It’s like opening a line of credit with a coffee shop,” explains Langel. “The fees are amortized over the transactions.”

The applicability of Bitcoin powered by the Lighting Network spans well beyond you saving on fees at the coffee shop. It’s through this added layer of technology that the greatest everyday impact can be made. The Lightning Network can empower media companies, for example, to sell articles by micropayments. It can make loyalty rewards transferable instantly. Already, the cost remittances to El Salvador are made cheaper through Bitcoin and the applied Layer 2 Technologies.

A fairer financial future is no longer on the horizon — it’s here. From ecommerce to insurance to banking and non-profit management, entities all over the globe are bolstered by Bitcoin. Guided and protected by purpose-driven custodians like NYDIG, more and more people are not only reaffirming the security of Bitcoin as a currency — but also seeing how it can level the financial landscape for billions.

NYDIG is building a better economy by making Bitcoin accessible to all. Sign up to enjoy free research and insights about Bitcoin at NYDIG.com.

This content has been prepared solely for informational purposes by New York Digital Investment Group, and does not represent investment advice or provide an opinion regarding the fairness of any transaction nor does it constitute an offer, solicitation or a recommendation to buy or sell any particular security or instrument or to adopt any investment strategy. Bitcoin investments have historically been highly volatile, and are for investors with a high risk tolerance. Investors in bitcoin could lose the entire value of their investment.

Custody and execution of purchases and sales of digital assets are effected through NYDIG Execution LLC and NYDIG Trust Company LLC, which are authorized by the New York Department of Financial Services (“NYDFS”) to engage in virtual currency business activity. NYDIG Trust Company LLC is a limited purpose trust company chartered by the NYDFS. Note that neither the SEC nor the CFTC has approved or disapproved of any of NYDIG’s products. In addition, regulation of certain of NYDIG’s subsidiaries by the SEC, CFTC, NYDFS, or any other regulator does not imply any endorsement by any such regulator.