Armed with a motion-tracking sensor on the inside, the SyncPen turns everything you write into digital text, converting your hand-written notes, doodles, and sketches into editable digital files. The NEWYES SyncPen looks and feels like a regular ballpoint pen on the outside, but is full of advanced technology that powers its capabilities.

Think of the SyncPen as a stylus that can also write on paper. The SyncPen features a micro-camera that captures what you write at a frequency of 200 frames per second, turning all your notes into digital text that can be stored infinitely, edited, and even searched through.

The pen digitally records all your notes onto your smart device, allowing you to seamlessly transition between physical and digital note taking.

The SyncPen’s recognizes 66 languages and can even transcribe and translate mathematical symbols. The pen actively performs handwriting recognition, enabling you to retain in your natural handwriting while it works to translate.

What’s better, you won’t need your phone or tablet when writing. NEWYES SyncPen is able to store up to 800 pages of notes while offline. As soon as you connect with the app, your notes will be transferred  immediately. When using SyncPen, you’ll never lose your notes. Once your notes are transferred to the app, they are then automatically uploaded to the cloud (the app even supports 3rd party cloud note taking apps like Evernote and OneNote).

The pen comes with a detachable refill system that lets you replace the ballpoint nib with a capacitive tip, allowing you to use it on digital devices as a regular stylus too. When paired along with the NEWYES LCD Tablet, the SyncPen can take notes digitally. 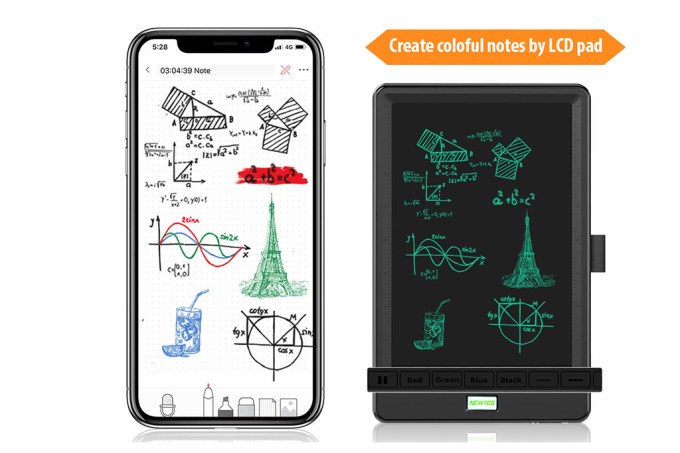 You can use the 10″ LCD Pad as a paperless alternative to a notebook, but moreover, the pad lets you take notes in different colors, while also allowing you to perform activities like directly sending your notes as an email to others, collaborating with teams to share notes, and even recording audio logs alongside your text. Your notes are automatically saved when you clear the screen to start a new page.

Created to mirror a ballpoint pen, the SyncPen weighs a mere 20 grams, and works from every angle (unlike some of its competitors). It features Bluetooth 5.0, and seamlessly sends written text to the app, which you can use to convert your notes into a variety of formats including .docx, .txt, .pdf, .jpg, .mp4, and more.

Back the NEWYES SyncPen on Kickstarter today to reserve your device!