As we here at L1ght help Trust & Safety teams to identify and remove such material from social platforms, content sites and search products, we thought it would be useful to share a walkthrough of the common denominators within CSAM classifications and regulations across some key geographies.

Please note: This version of the primer has been edited down for length. Download the full free version here: l1ght.com

Child pornography, also known as “Child Sexual Abusive Material” is the type of pornography that exploits children for sexual gratification. Its production either entails the direct involvement / sexual assault of a child, or a simulation of it using actors or animation.

Over the years, governments, law enforcement agencies, academia and NGOs have been attempting to create a “scale” or “classification” that will be used as a guide when it comes to defining what precisely constitutes CSAM, and how to differentiate between various instantiations of it. The need arose to create a single, simple and clear scale, by which government entities can not only define, but also penalize offenders according to a well-defined range of severity. Unfortunately, for a wide variety of reasons, a consensus CSAM scale could not be agreed upon, causing the evolution of local state and country versions of it in different geographical locations.

For the purposes of this piece, we will use the acronym CSAM (Child Sexual Abusive Material).

The first groundbreaking research on CSAM classification was conducted at the Department of Applied Psychology at College Cork University, Ireland. The rating system created there, as part of the COPINE Project (“Combating Paedophile Information Networks in Europe”), was primarily used in the United Kingdom to categorize the severity of images of child sexual abuse. See table below:

While the COPINE classification was geared more towards therapeutic psychological purposes, the need arose for a scale by which indecent images of children could be “graded”, and that would be more useful for judicial proceedings. To this end, following the case of “Regina v. Oliver” in the England & Wales Court of Appeal, a more economical scale was created, based on COPINE terminology, known as the SAP scale:

In 2013 a new “Sexual Offences Definitive Guideline” (SODG) was published. This scale was adopted for sentencing in England & Wales in 2014, and until today is the “go-to” scale with respect to evaluating CSAM in its jurisdictions. 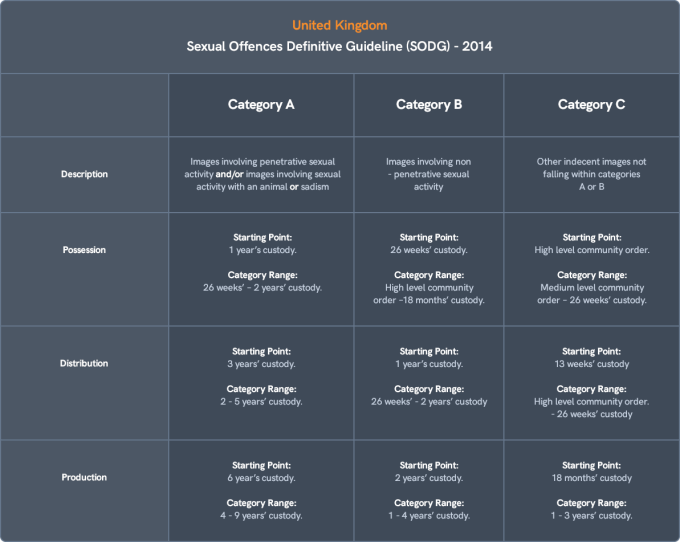 (opens in a new window)

Laws in the United States define child pornography as a form of child sexual exploitation in the form of any visual depiction of sexually explicit conduct involving a minor (<18 years of age). Visual depictions include photographs, videos, digital or computer generated images indistinguishable from an actual minor, and images created, adapted, or modified, but appear to depict an identifiable, actual minor. Electronically stored data that can be converted into a visual image of child pornography are also deemed illegal visual depictions under federal law.

According to the Department of Justice (DOJ), the legal definition of ”sexually explicit conduct” does not require that the content depict a child engaging in sexual activity necessarily, but instead that a depiction of child nudity may constitute illegal child pornography provided it is sufficiently sexually suggestive. Child pornography images are not protected under First Amendment rights, and are illegal contraband under federal law.

Distribution and receipt of child pornography has been an area of congressional concern since 1977, when the “Protection of Children against Sexual Exploitation” Act was passed. This Act prohibites the use of children to produce pornography and sets a 10-year maximum for first-time trafficking offenders and a 15-year statutory maximum, plus a two-year mandatory minimum, for subsequent offenders.

Congress further clarified its stance against traffickers by passing the Child Protection Act in 1984, which extended penalties to producers and traffickers of child pornography. In 1986 in response to the “Meese Report”, Congress enacted the “Child Sexual Abuse and Pornography” Act of 1986 and the “Child Abuse Victims’ Rights” Act of 1986. The latter provided civil remedies for victims and increased the mandatory minimum penalty for repeat-child-pornography-offenders from 2 to 5 years of imprisonment.

Currently, under federal law, statutory minimums range from 5 to 20 years, to life imprisonment (if the offender has prior convictions for child sexual exploitation, or if the images are violent and the child was sexually abused).

While the possession, creation, reception, and distribution of child pornography is illegal under both federal and state law in all 50 states, cases can become complicated due to the variation in state laws. States vary as to whether first possession offenses are considered felonies or misdemeanours. Federal jurisdiction, however, almost always applies when a child pornography violation occurs using the internet.

Under Canadian law, within the definition of “Offences Tending to Corrupt Morals” (1985), child pornography can be defined provided the evidence falls into one of the four following categories:

According to the above legislation, there is a clear distinction between four types of child pornography offenses: (i) Creation, (ii) Distribution, (iii) Possession and (iv) Accessing. If a court finds that a child pornography crime was committed with an intent to make profit, this will be considered to be an “aggravating factor” in determining the severity of sentence an offender should receive.

The law also specifies circumstances under which possession of CSAM is not a crime.  One such exception applies if the defendant believed that the person depicted in the material was 18 years of age or over, provided he/she “took all reasonable steps to ascertain the age of the person”. Possession of child pornography will also not be illegal if it is possessed for “a legitimate purpose related to the administration of justice or to science, medicine, education or art” and “does not pose an undue risk of harm to persons under the age of eighteen years.” .

Mandatory minimum jail sentences are prescribed for all CSAM crimes, with no discretion given to judges to issue shorter sentences. The mandatory minimums have increased over the last decade and are currently as follows:

Even in an era dominated by technology, CSAM identification is performed manually by people. This not only makes it impossible to react in “real time” but also causes vast psychological challenges to those exposed to such toxic materials.

Currently, there are two major technological concepts used to identify CSAM. The first is based on fingerprinting known files (known as “Hashing”). The second, employs image analysis and machine learning for CSAM identification.

Hashing allows CSAM media files to be “fingerprinted” through this process:

The largest database of hashed CSAM images is offered by Microsoft as “PhotoDNA”.

The two disadvantages of this method are that, 1) new CSAM (even slightly altered) will not be identified, and 2) it requires human moderation to determine the existence of CSAM to trigger the Hashing process itself.

With Machine Learning (the method that we at L1ght develop), Computer Vision algorithms are trained to determine if an image contains CSAM. This is done by “feeding” the algorithm with images that have already been determined to contain CSAM.

These machine learning models simulate the way by which a human being thinks and works.

The benefits of this method are that 1) it dramatically increases the ability to identify known and unknown CSAM at scale, and 2) it reduces the psychological impact on human moderators.

The full version of this primer is available for download here: l1ght.com