If you ask your typical employee what their favorite task management app is, you’re probably going to get something along the lines of, “we use X, but it’s so bad.”

And, really, task management is hard! There’s no silver bullet when it comes to ensuring something gets done inside a company—especially if multiple people are working on it across different divisions. It might be hard enough to get everyone to agree on how to monitor the progress of that task in the first place.

That’s why there are plenty of companies vying to become the best tool to help startups get stuff done. They face the challenge of being a flexible enough tool to manage multiple workflows (and personalities) while being simple enough that everyone can agree on how to use them in the first place. And, in fact, 2019 is a great year to be alive as a startup because all these companies actually care about solving the problem—and competing amongst themselves to be the best tool.

We analyzed anonymized, aggregated Brex usage data to get a better sense of what task management tools were the top choices for startups. Brex customers are primarily early- to mid-stage startups (that tend to be early adopters), though we have an increasingly broad base of ecommerce and life sciences customers.

Once you’ve finally gotten everyone to use the same task management tool (if that’s even possible), it’ll be pretty hard to rip it out and replace it with something new. So it’s crucial that you pick the best tool that works for you early on and not expect to replace it down the line—and understanding what tools startups use the most may help you figure out where to start your search.

The short answer is: There’s a reason Atlassian is worth as much as it is. There is, however, a longer answer to go with it.

Atlassian continued to account for the majority of startup spending in the third quarter this year, with very little change compared to the first half of the year. But we did, indeed, see some movement among the other top task management tools as the year went on. Heading into the third quarter, Monday.com—founded in 2012—gained ground on other services. That growth came at the expense of Airtable and Atlassian. 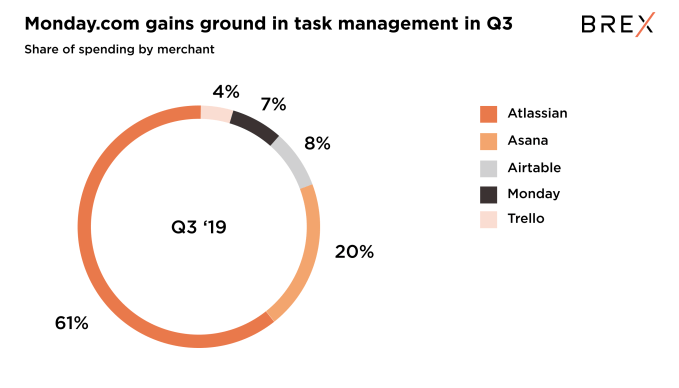 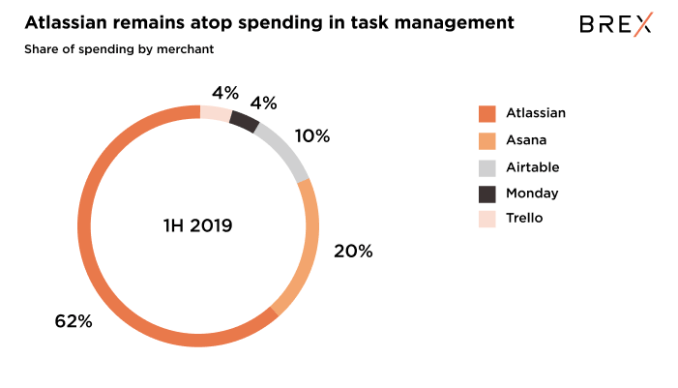 All of these tools are products developed by incredibly valuable companies. Airtable hit unicorn status—meaning the startup is valued at more than $1 billion—in November last year. Meanwhile, Monday.com raised an additional $150 million in July this year. Monday.com is also considered a unicorn, valued at $1.9 billion in its last funding round. Asana was valued at $1.5 billion in its funding round in November last year.

While Atlassian represents the only public company in that group (and it also owns Trello), its stock has also risen more than 80% in the last year. The rest may be unicorns, but Atlassian—which also owns products like online repository service Bitbucket—is a $31 billion company as of mid-November.

Even though they might seem like minor moves among the smaller players, it shows that there continues to be competition to build the best task management service. That, of course, is great—because while it may be a Sisyphean feat to begin with, at least we’re trying to make it work.

Uncover even more learnings about startups and how they work on the Brex Startup Data Hub.