The fourth quarter is typically a critical one for ecommerce companies. Consumers are starting to line up their gift choices for the holidays. Even some of the largest companies in the world depend on an explosive fourth quarter to drive their business for the entire year.

The third quarter was, indeed, a busy one for ecommerce companies this year. We analyzed anonymized aggregate spending data for Brex ecommerce customers throughout the third quarter. We found a dramatic spike in advertising spend from the first half of the year, with much of that still going to Facebook. We also found that a whole lot remains constant for these companies: they still need to ensure they’re operating at peak efficiency.

Advertising and marketing spend once again topped the list of expenses for Brex ecommerce customers. In the first half of the year, around 39% of all ecommerce spend went toward advertising and marketing. In the third quarter, we saw that make a considerable jump, while shipping and inventory costs remained the number two and number three expenses. 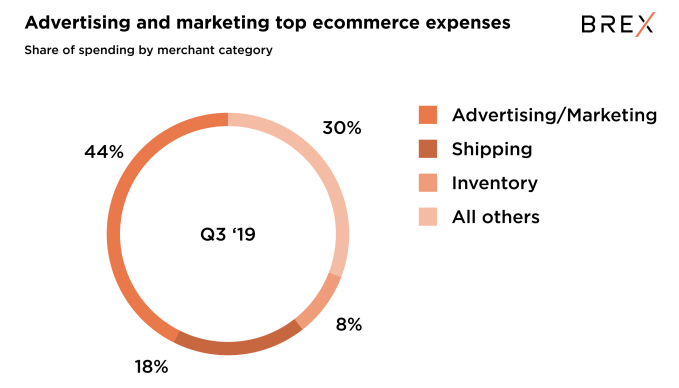 When it comes to advertising, as usual, it’s hard to argue against a known entity. Ecommerce companies need to get in front of their customers early if they’re going to capture a sale down the line—especially if they’re competing in a crowded market. That means deploying their advertising spend as effectively as possible. And once again, Facebook was the top choice for Brex ecommerce customers looking to advertise. 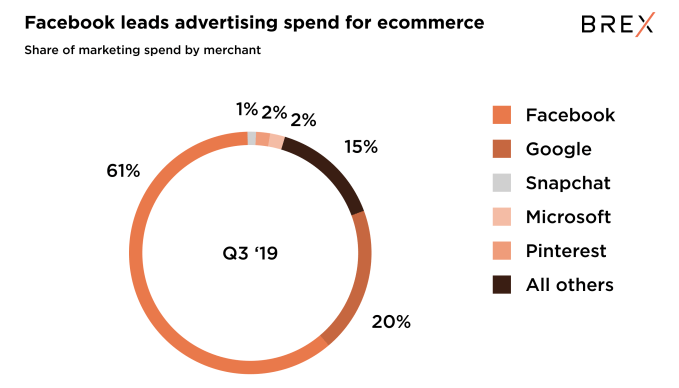 Pinterest and Snapchat once again made an appearance among the top spend for Brex ecommerce customers. Each offers a different avenue to capture the interest of consumers. Pinterest, for example, tries to position itself as offering advertisers a way to capture interest in a different kind of customer life cycle. Snapchat meanwhile may be able to offer a highly engaged audience.

But when a company puts a dollar into the Facebook advertising machine, they generally know what they’re getting back. The same is true for Google. Other often-used advertising platforms for Brex ecommerce customers in the third quarter included ShareASale, AdRoll, Outbrain, Yahoo, and Amazon Marketing.

A look at ecommerce operations

Getting the attention of customers is still only a small portion of the battle. Ecommerce companies have to ensure that their products are great, and that they also end up in the hands of customers. As a result, shipping and operations expenses are a substantial part of spending for Brex ecommerce customers.

FedEx is still the largest shipping expense for Brex customers. But we also saw an uptick in usage from Flexport and Endicia in the third quarter this year. As our ecommerce customer base grows, we’ll likely see a lot of different kinds of approaches to advertising. But at the same time, competition is fiercer than ever—and ecommerce companies may just be looking for ways to optimize their business. 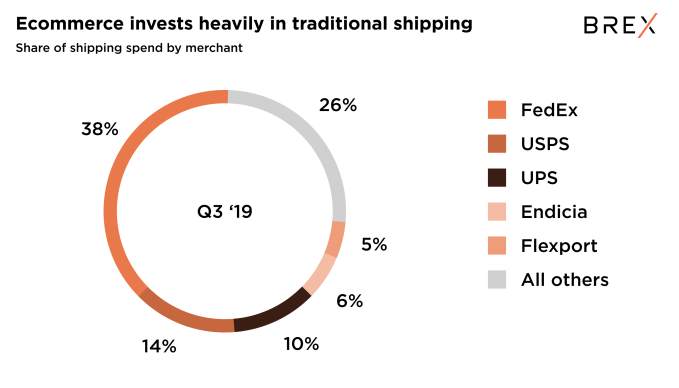 SaaS products, while a small part of ecommerce spending, are also crucial to running a business. But the nice thing about SaaS products is that they’re predictable costs for startups. Operational software like Shopify and ReturnLogic and customer service tools like Zendesk are among some of the top expenses for Brex ecommerce companies. Here’s a quick look at the top:

And then it trails off into a long tail of operational tools like Google G Suite, SendGrid, and others—the kind of operational software deployment you’d see at any kind of company with an online presence.

Looking ahead to the holidays

We can clearly see a ramp up in marketing spend ahead of the holidays. As such, it would seem that Brex ecommerce companies are starting to, once again, invest ahead of their sales. And that’s going to be as much of an art as it is a science—you have to essentially do your best to guess the demand for your products, and try to prepare your business to fulfill that demand.

As part of its underwriting process, Brex maintains visibility into the spending of companies that use its products. Companies who asked that their data not to be shared were not used, and any company that does not wish to share its data for future aggregated analysis may request to exclude it from being shared in the aggregate.