Approximately 2 months ago in July 2021, Bluetti — the portable solar storage pioneer, announced their release of an industry first, modular solar power station — the AC300 and its accompanying LFP battery module, the B300 (3,072Wh).

At long last, after two months of waiting, the AC300 and B300 are finally here!

When using a solar generator, you are essentially using free energy from the sun instead of using costly fossil fuels. You can continue getting this free energy from the sun for the lifespan of your solar panels, which is usually around 25 to 30 years. And, Unlike most conventional fuel or gas generators, solar generators have absolutely no moving parts and do not use liquid fuel. This means that the likelihood of needing to pay for any types of repairs is significantly lower.

Aside from the financial gains of using a solar generator, choosing a green technology over other fossil fueled systems has various environmental and health benefits. Gas powered generators lead to air pollution alongside noise pollution, and while the latter is just simply annoying, the former contributes to climate change and respiratory diseases.

Why choose the Bluetti AC300? 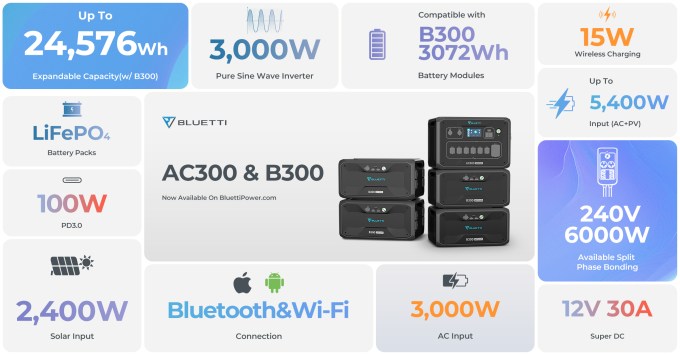 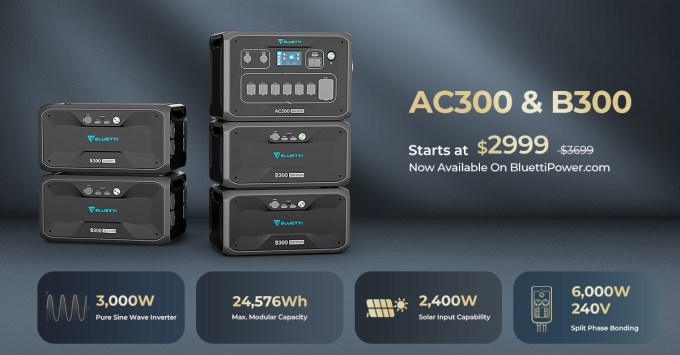 The AC200 MAX is back in stock

After being sold-out, the AC200 MAX and B230 battery modules are now both available for purchase again. The AC200 MAX has a standard built-in 2,048Wh LFP battery pack (with expandable battery capabilities) — an all-round upgrade of the long loved AC200/P.

For a limited time period, Bluetti is also offering a discount coupon on the AC200 MAX meaning it can now be bought for $1,799, ($300 in savings). Additional savings can be made by purchasing bundles.

If you are looking for raw power, look no further than: www.bluettipower.com