What if homes could be built like cars to solve our affordable housing shortage? Or what if baristas could become construction workers? What if a car could walk? And what if an artist could become an inventor who solves decades-old workplace safety problems? When Autodesk partners with innovators, these “what ifs” become new realities that change our world.

According to United Nations statistics, 1.6 billion people worldwide lack adequate housing, and 100 million are homeless. In places like San Francisco, where soaring construction costs are among the highest in the world, schoolteachers, retail and hospitality workers, bus drivers, nurses, and other essential workers struggle to find affordable housing.

It’s here that Autodesk teamed up with Factory_OS to catalyze industry innovation that may be key to solving the global housing crisis. Using 3D modeling software and cloud collaboration tools to improve productivity, Factory_OS delivers housing units constructed 40% faster, 20% less expensive, and with 70% less waste than traditional units from on-site construction. Inside the factory, reskilled and newly trained workers build housing units in a way that more closely resembles an auto assembly line than a construction site, and in safer, more sustainable working conditions.

Rick Holliday, the co-founder and co-CEO of Factory_OS, says technology is helping them crack the code on modular housing. “The biggest impediment to wider adoption of industrialized construction has been the inability for the architecture and engineering processes to marry the construction process. Working with Autodesk creates the opportunity for a huge breakthrough through better integration, as things can be done quicker, and with better employee training, from design through the manufacturing process.”

The convergence of methodology from manufacturing and construction may be key to transforming the construction industry, one known for its inefficiency and skyrocketing costs.

Equipping workers to adapt during the pandemic, saving jobs and growing business 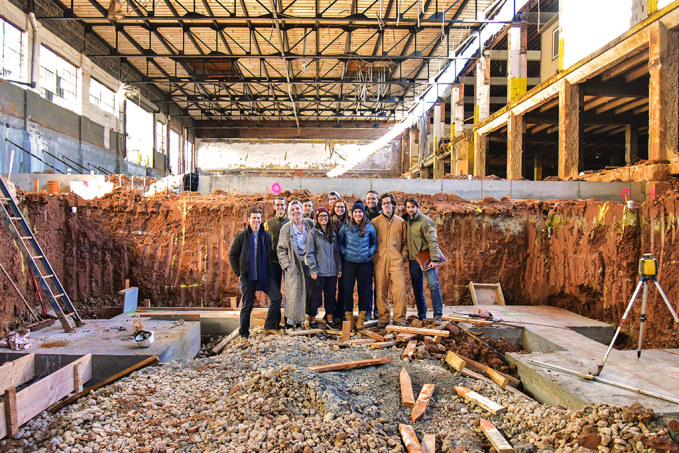 Coming back from deployment to Afghanistan, US Marines Michael Haft and Harrison Suarez founded Compass Coffee, now a seven-year-old coffee roasting company with 13 café locations and a roasting and packaging facility in the Washington, D.C. area. At the start of the pandemic, Compass Coffee’s business was down 90%. Cafés temporarily closed and workers were laid off. But with design and construction underway on a 60,000 square-foot coffee roasting plant and café in an old tomato cannery, Haft, Suarez, and Joel Shetterly, head of design, had a crazy idea: What if baristas could become construction workers? For a company obsessed with the use of design to create intuitive spaces and an exceptional experience for its customers, the idea took hold.

All they needed was 3D models and grit. The power of 3D building information modeling — or BIM — is rich documentation of every aspect of a building’s design, layout, and equipment. The company used the detailed Autodesk Revit models as guides for reskilling 20 workers to become construction workers, taking it one section of the project at a time.

Shetterly said the work moved more slowly than if a general contractor had done it, but in the end, it worked. “Practically overnight, we put these people to work building so that they would still have their jobs. But we installed so much machinery. We literally taught a team of espresso techs, who had only ever worked on espresso machines, how to install motors and sensors for our roasting equipment.”

With a severe shortage of workers now a threat to many industries beyond construction, we may see more companies taking a page from the Compass playbook in leveraging technology to reskill and upskill workers. Such an approach builds resilience in an age of automation and growing risk of pandemics, data security threats, and climate-related weather events.

Shetterly points out that the company’s ability to equip its workers to adapt to new realities bodes well for its future. “We put our teams to work during the pandemic, not because teaching baristas how to do construction was the easy or obvious thing to do — in fact, it was completely crazy — but because we truly believe in investing in our people, and we knew that if we continued to invest in our teams throughout all of the awful challenges of the last year that everyone at Compass would carry the hard-earned lessons of reliance and grit forward into better times ahead.” 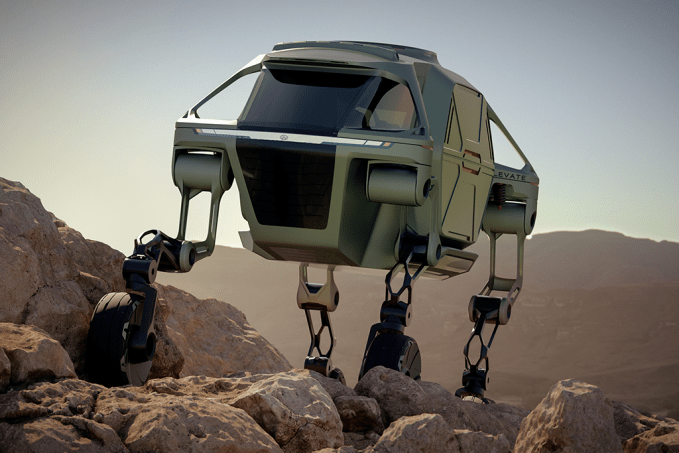 “What if a car could walk?” Hyundai Motor Group asked this bold question when it set out to make Elevate, the first Ultimate Mobility Vehicle (UMV), blending technology found in electric cars and robotics.

Elevate is a car capable of transforming from a four-wheel drive car into a four-legged walking machine. As a walking machine it is capable of both mammalian and reptilian walking gaits, allowing it to move in any direction. When the legs fold into a drive-mode, Elevate can drive at highway speeds just like any other vehicle. When the legs unfold, it can climb a five-foot wall, walk over diverse terrain, and achieve a 15-foot track width, all while keeping its cab and passengers perfectly level. Elevate could eventually be used to transport goods and supplies across inaccessible terrain to help save lives in search and rescue operations.

At Hyundai Motor Groups New Horizons Studio where Elevate was developed, Autodesk’s AI-powered generative design was used to tackle complex design and engineering challenges. Generative design allows engineers to explore all the possible permutations of a solution, quickly producing design alternatives. It tests and learns from each iteration what works and what doesn’t. Hyundai’s John Suh calls it a “mind multiplier.”

“We needed an approach and tools capable of venturing far beyond what we know is doable into the realm of what we dream is possible. Using Autodesk generative design technology, our team will be able to create legs that are lightweight enough for agile handling, yet strong enough to manage the loads and dynamics during drive-mode and walking-mode.”

Industry experts say there will be more changes to the automotive industry in the next five years than in the last 100 combined. To stay competitive, auto companies are adopting new technologies to challenge the status quo. Generative design can be a game changer for automakers looking to lightweight parts for improvements on everything from better fuel economy to a longer range on electric vehicles, and beyond. 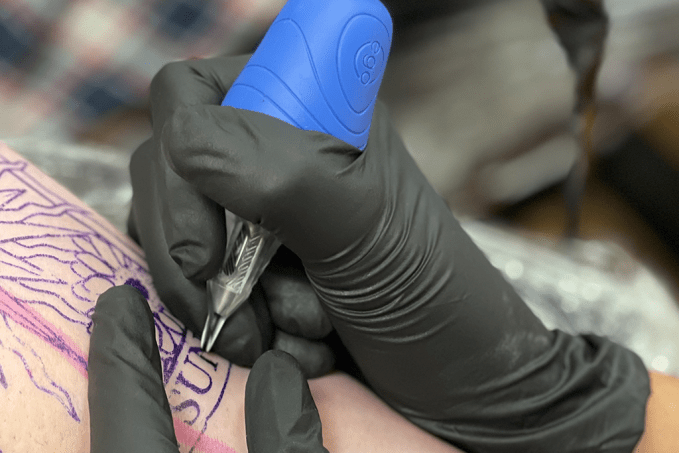 Practiced since at least the Neolithic period, tattooing is now a $3 billion industry. Yet modern tattoo equipment is still reminiscent of the first electric tattoo machine patented by Samuel O’Reilly in the late 1800s, a design based on the electric pen created by Thomas Edison. “When we draw or write, our grip uses more muscle power than we’re aware of, which causes strain to the body,” said UK tattoo artist Richard Beston, known professionally as Bez. “When we use a weighted, vibrating tattoo machine, the strain is amplified, so there’s more potential for health complications. Conditions like carpal tunnel syndrome are common in tattooists and can mean a short career.”

With a background in video game illustration, Bez came to tattooing later in life and soon recognized the ergonomics of tattoo guns were terrible. He set out to change the paradigm by teaching himself computer-assisted design or CAD on Autodesk’s cloud-based software Fusion 360. With no formal engineering or manufacturing design training, he relied on YouTube videos and online tutorials to train himself in how to design for manufacturing. Nearly a decade later under the Ego brand, Bez has designed and manufactured three models of lighter-weight tattoo guns that reduce wrist strain, vibration, and noise.

“I could not have designed these machines and got this market growing without Fusion 360,” he says. “Objectively, there have been some niggles, and it’s not 100% perfect, he says, but he admits that with no formal training the software could not have been better to work with for developing these products.”

The Ego Vertex, V2, and the new pen-like Switch have taken the tattoo market by storm, with more than 3,000 products sold each year. Now Ego and Bez’s Triple Six Studios have expanded into a new location in Sunderland, UK, to form a “creative hive” where designers can make prototype products using tools like 3D printers and Fusion 360 to innovate new solutions and create the new possible. “We want to create a space that inventors and ‘imagineers’ can come and design, experiment, and make stuff. This is what I did and my products sell, so others can do it too. The Northeast is a creative region and we now have the digital tools to spark a mini-manufacturing revolution here.”

Across industries, innovators like Beston, Suh, Shetterly, and Holliday are harnessing the power of data and leveraging technology to solve the world’s biggest challenges. From reskilling and upskilling workers to combining technologies to using generative design to imagine the impossible, they are partnering with Autodesk to make the new possible, enabling a sustainable world, designed and made for all.