TechCrunch loves robotics. For a media organization focused on startups, that may come as a surprise considering that robotics was long viewed as a very slow moving category by venture capitalists. That reputation began to change five years ago when the many technologies required to build robotics, notably sophisticated sensors and GPUs, became much more capable and affordable for startups, while at the same time artificial intelligence roared onto the scene. The result was a surge in robotics startups and investments, which TechCrunch saw contained the makings of a great event. Who doesn’t love cutting edge demos of robotics and interviews with their creators?

In 2017, TechCrunch teamed up with MIT’s CSAIL to produce TC Sessions: Robotics at MIT’s Kresge Auditorium in July 2017. The single-day event hosted over 800 attendees for a speaker line-up that included many of the world top roboticists, including Helen Grenier (CyPhyWorks), Rod Brooks (ReThink Robotics), Marc Raibert (Boston Dynamics), Martin Buehler (Disney), Tye Brady (Amazon Robotics), and Daniela Rus (MIT CSAIL), among many others. 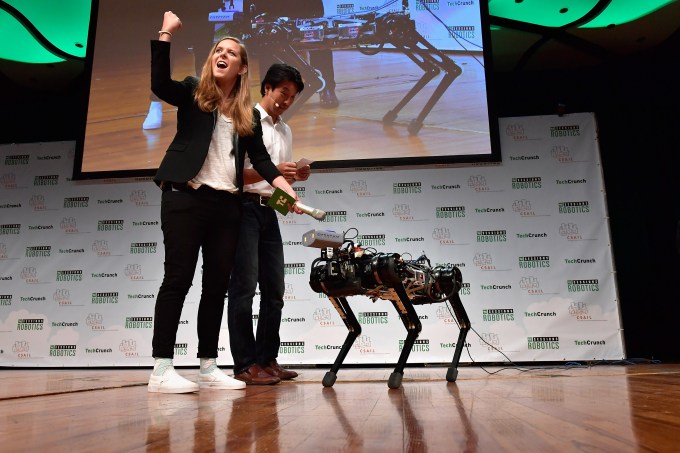 The show was captured on video and later published on TechCrunch, where they received over 1.5 million views. The speakers and audience, which was made up heavily of engineering students from MIT and the Boston area, were so enthusiastic that we decided to repeat the show in 2018.

The opportunity came in the form of an invitation from the engineering school at UC Berkeley, which like MIT is a robotics and AI powerhouse. TechCrunch worked with several legendary Berkeley technologists, including Ken Goldberg, Kaz Kazerooni and Pieter Abbeel to produce another remarkable day of robotics and AI focused programming. Among the speakers were Deepu Talla (NVIDIA), Manish Kothari (SRI), Chris Urmson (Aurora), Melonee Wise (Fetch Robotics) and many more.

More than 1,100 people attended the show, nearly one-third students and one-third engineers, while another 26% were founders or investors. Video from the show produced 3.2 million video views. The net promoter score for the show was one of the highest ever for a TechCrunch event, and attendees were especially happy with the well attended workshops, running in parallel with the main stage that were introduced for the first time.

This year, TC Sessions: Robotics + AI is returning to UC Berkeley and Zellerbach for a repeat performance, and we’re eager to welcome partners to exhibit, conduct on stage “Innovation Breaks” or run breakout sessions. The audience and speakers represent the cream of the robotics / AI technology, startups, and student realms. It’s the perfect forum to showcase technology and engage with engineering students as well as founders and investors. Sponsorship opportunities are available now – for more information, click here. If you’d like to be contacted by a sales person to discuss pricing, please fill out this form. Or you can grab your tickets to the event now at https://techcrunch.com/events/tc-sessions-robotics-ai-2019/.